Recently I've been unable to unlike a song. In other words, I clicked the thumbs up at some point and am now trying deselect it. I get an error message saying Pandora is experiencing technical difficulties. Well they've been experiencing these difficulties for several months now and it's annoying. It doesn't happen all the time, but it happens more often than not. Anyone else experiencing this?

I'm on US Mobile (Verizon)

Another recent issue I'm having is pandora isn't remembering my station listen order history.  Whenever I close the app, the next time I use it, my stations are listed in some weird and unhelpful order. I used to be able to listen to a station and it'd remember the order of the stations I played. I was able to organize my stations this way. Now it doesn't save that info, and THAT is so annoying I can't tell you!!! Now I'm constantly having to search for the station I want to play, even if it's one I just listened to the other day (or a few hours ago!!!)

@aVamp1r3 Thanks for getting back to me with those details. I've shared the additional info on the ticket.

Can you share a screenshot of how your stations are sorted?

Are they sorted alphabetically?

If they aren't, they should be in the order of most recently listened to from the My Collection screen.

Also, do you see the last station listened to under your "Recently Played" section?

Here is a screenshot of the 'top' stations.. None of these have been listened to in a LONG time, the second station I don't think I've listened to for months... and this is the 'default' lineup. 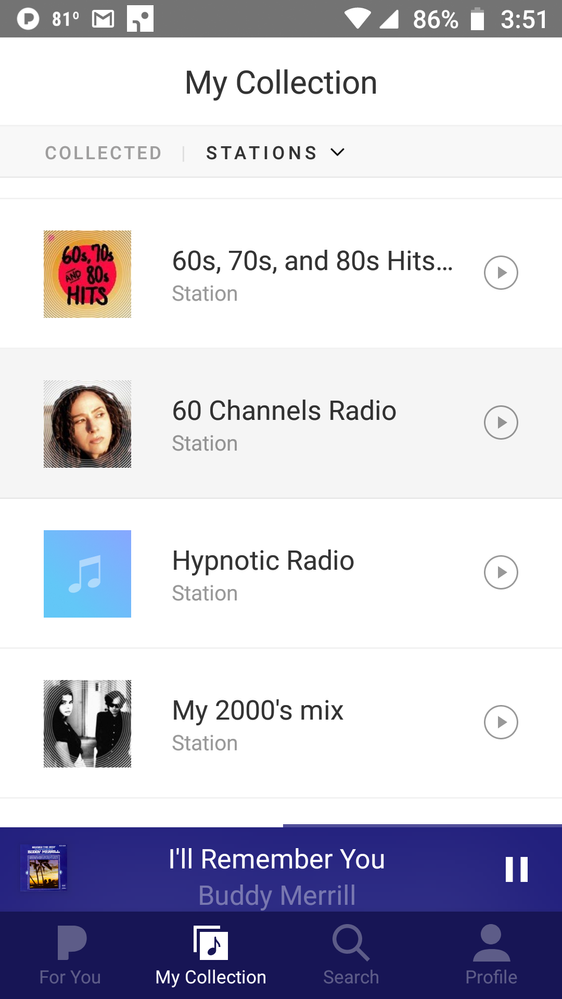 It is NOT alphabetical, though from this snippet it LOOKS like it is. but no... the stations are what appear to be completely random... but it's the same order each time I start the app (except while I'm using it... or if I restart app right after closing it). 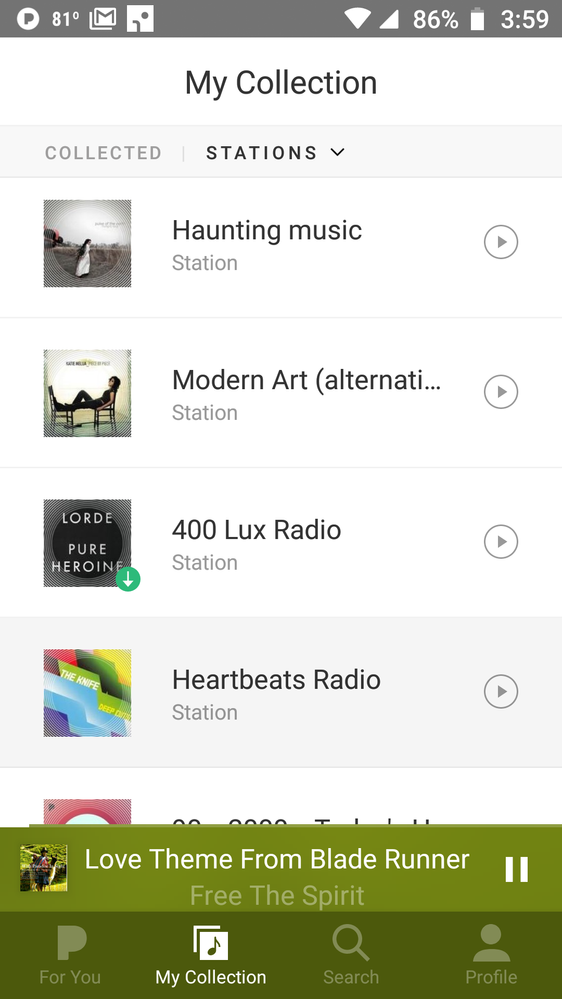 The recently played listing is way more accurate.  That's now how I have been searching for my stations as I have a LOT of them. I really hate this... it's a relatively recent problem. I think it's two updates ago it was working fine (except for when the app crashes-which is OFTEN!!!!!!!!!)

@aVamp1r3 Appreciate you taking the time to share those screenshots. This is helpful.

Let's try out these troubleshooting steps to see if it helps with the sorting. If not, I will need to create a new ticket so engineering investigate the sorting.

*Pandora Premium and Premium Family listeners may need to re-download some of their offline content after this. Pandora Plus users, however, should receive that offline content again automatically.
Thanks for sticking with me on this!
Alyssa | Community Moderator

Thank you! I deeply appreciate YOU taking the time to answer. I pay for Pandora, and I have to admit, these issues have been bugging me so much I've been considering using amazon prime music more.

I have followed the steps and listened to a half dozen stations. Hopefully in a few hours the order will remain the same.

No problem at all! I'm always happy to help in the best way that I can. @aVamp1r3

Feel free to keep me updated on whether the sorting issue resurfaces. 👍

Well, unfortunately none of that helped. I cleaned the cashe and data off phone, uninstalled it, reinstalled Pandora, then did the trouble steps (all of them), listened to a few stations.... and....

3hrs later all the stations are back to that random 'default'  order that isn't any kind of order. it's not the date I created station, not order I listened to, not alphabetical... there is no logic to the 'order' it's listing my stations to that I can figure out. but I HATE this!! can I install an older version of the app or something?

@aVamp1r3 Sorry to hear those steps didn't help. You can check the Google Play Store to see if there's an older version of the app that you can download.

In the meantime, I've shared your screenshots and feedback with our engineering team as well.

When will the thumbs be fixed on android app? I've had problems for months with not being able to thumb up, thumb down, or remove a thumb from a song. Every time I try it says it encountered an unexpected error.

I moved your post over to this existing thread to keep the Android space organized:  Error When Removing Thumb Ratings on Android

We currently have a ticket open for this issue with our engineering team. I've shared your feedback. I'd also like to share the details of your device with them.

Could you provide the following info?

Thanks so much for your help. 📲

I’m having this same problem since updating! So annoying

Thanks so much for taking the time to let us know about your experience. I understand your frustration with this.

Let me know and I can submit this information to our engineering team on your behalf. Same thing happening to me!

Sorry to hear that you're running into this as well.

Everytime I try to remove or change an existing thumb using the mobile app, it doesnt work and I get an error message that says pandora encountered an unexpected technical error. I've had this problem for months. I've had to start removing thumbs because pandora has started playing only the same 15 songs on each station with little variety anymore.

Thanks so much for reporting your issue, and sorry for the continued trouble.

I moved your post over to this existing thread to keep the community space organized: Error When Removing Thumb Ratings on Android

Based on your message, it sounds like this issue happens when you're on the Now Playing screen. I’ve enabled a trace on your Pandora account to help us better understand what’s happening. For this trace to be useful, we’ll need you to run through our troubleshooting steps once more.

If you continue to have trouble with this, could you share more information about your device?

When a thumbs up song plays in free Pandora 2010.1, I'm not able to toggle the thumbs up off. I get a, "We're having unexpected technical difficulties" error message. I've been getting this error for about a year now and I haven't found a single post about it. I've gotten the error on multiple phones, multiple versions of Pandora, and multiple versions of Android. The error is only received on my Android devices. I have never seen this error when running free Pandora on my Vizio TV and computer. Again, I get the error when I'm trying to toggle off the thumbs up for a given song. Happens 100% of the time for songs that I have thumbed up in a previous free Pandora 2010.1 session. I'm currently running free Pandora 2010.1 on Android 10 on a Motorola G7, but I've also seen this error on previous Android versions on my Motorola G5 Plus. I've reinstalled Pandora - didn't work. I've cleared cache - didn't work. I've cleared all Pandora data - didn't work. My daughter tells me to switch to Spotify, but I've got a lot of thumbs invested in Pandora.

Thanks so much for sharing your experience on the community. I completely understand how frustrating this must be. I'm very sorry for the continued trouble. To keep everything organized, I moved your post over to this existing thread: Error When Removing Thumb Ratings on Android

Our engineering team is aware of this issue In the meantime, I've shared your feedback as well as your device details with them for further review.

We appreciate your patience while they work on this. 🎧

I am also having this problem on all of my stations 😞

Thanks for letting us know about this. I do see that you mentioned the same issue in October 2020. Our engineering team is still working on fixing this issue.

I know that this can be very frustrating. Appreciate your patience during this process! 🎧