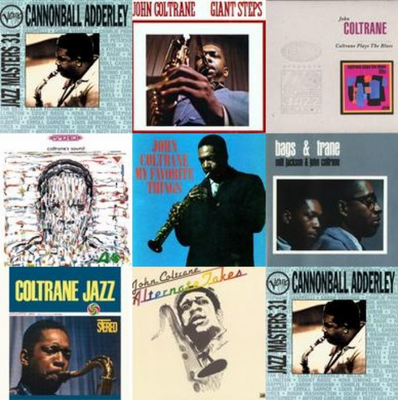 John Coltrane was a great musical innovator, and one of his great innovations was his use of "alternate" or "substitute" harmonies. Jazz musicians call harmonies "changes" (short for "chord changes") and the most famous of Trane's harmonic inventions are called "Giant Steps changes" or just "Coltrane changes."

A full explanation of Coltrane changes is complicated, so I won't bore you, but the basics are that it is a cycle of chords that jump very far from each other very quickly, and cycle back to the key where they started after 3 jumps of 2 chords each. The resulting sound is powerful, dynamic, and intricate, and very difficult to improvise over. Trane loved complex challenges, and mastered these changes. He doesn't make it sound easy - it's obvious to listen to these tracks that this is a virtuoso accomplishment. But he does make it sound awesome.
Coltrane only recorded a dozen tracks using these changes, and only between 1959 and 1961. "Giant Steps," the first track on this playlist, is the most famous, and is a completely original composition. Most of the others are either Jazz standards where Coltrane substituted his changes for the original harmonies, or further re-harmonized versions of bebop tunes, such as "Countdown" which is based on Eddie Vinson's "Tune Up," "Fifth House," which is based on "Hot House" (which in turn is based on "What is this Thing Called Love"), "Satellite," which is based on "How High the Moon," and "26-2" which is based on Charlie Parker's "Confirmation."
So here are all of the tracks with Giant Steps and Coltrane substitutions in one playlist. Enjoy!
5 Kudos
Likes
Reply
1 Reply

Very cool, John! Thanks for this.