She began her music career as a folk singer and then as Gram Parsons' protégé. But it didn't take Emmylou Harris long to leave her mark on country music and Americana. In addition to being inducted into the Country Music Hall of Fame, she has also won 14 Grammys as well as the Grammy Lifetime Achievement Award. Harris began singing folk music before Byrds bass player Chris Hillman introduced her to Gram Parsons. She recorded and toured with Parsons in The Fallen Angels until his untimely death in 1973. Harris was then guaranteed a solo album by Warner Bros. Records on the condition that she put together a "hot band." She did just that, enlisting Elvis Presley session legends James Burton and Glen Hardin along with Rodney Crowell and several other A-listers. She's since worked with Willie Nelson, Dolly Parton, Linda Ronstadt, Beck, Sheryl Crowe, Ryan Adams, Conor Oberst, Mark Knopfler, Neil Young, Gillian Welch, David Rawlings, Alison Krauss, Buddy Miller, Patty Griffin and many others. 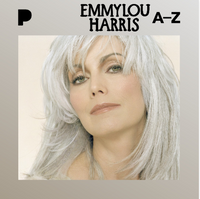 I have Emmylou Harris on my playlist. She has an awesome voice. She has had an outstanding career, she has also made a great impact on country music. She is truly one of a kind. Happy birthday Emmylou.