These power pop greats were best know for the MTV hit "Stacy's Mom", but that one hit had the downside of obscuring a deep catalog of wry, hook filled pop, driven by guitars that jangled and crunched, and heartfelt vocals wreathed in lush harmonies. With tongue firmly in cheek, Fountains Of Wayne could unleash a hilarious blast of pop-irony without breaking a sweat, but at the same time, that never kept them from creating darkly emotional and personal mini masterpieces. While they never received the sort of acclaim heaped on some of their contemporaries, FoW's rabid fanbase and seemingly endless well of catchy, well crafted pop, has made them one of the most enduring bands of the 90s and 2000s. RIP Adam Schlesinger. 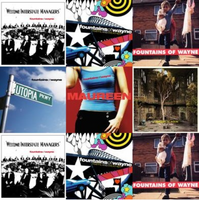