Why is it that every so often, somedays more often than others, if I’m listening to lets say Motown Radio or another station I’ll get some random song from Creedence Clearwater, Beatles, Eagles, etc. that has nothing related to the genre of that station that I am listening to? This drives me crazy. Is this the same with Pandora Plus? I have requested Casting Crowns radio, mercy me radio, and I end up with country music. I do like country music, but I would like to listen to Christian contemporary. However I don't like all Christian contemporary. That's why I request a certain artist. Used to be I would get Christian contemporary artists of similar artist type. Now I get Clasic rock, 80's country , outlaw country. If this was thumb print radio,that would be great! But I specifically want Christian . I'm waiting for heavy metal to show up. I'm really about done with Pandora. Why would I ever pay you for this service? If it can't be fixed, I'll switch to Amazon.

@Reahb I moved your post to this thread since you are running into a similar issue.

I've taken a look at the stations you reported, and I'm not seeing that you're rating songs with Thumbs Up or Thumbs Down.

Pandora stations adapt with every song to try to find the right music for your stations. Without Thumb info, however, Pandora has to guess what songs you like or don't like, which can often lead to the problem you've described.

Keep in mind, Thumbs are station specific, so please feel free to Thumb up and down accordingly. Giving a Thumb rating on one station will not affect any of your other stations.

This also means that you can use Thumbs to craft the sound you are trying to achieve and vary the playlists from station to station. For example, you might want to give a song you like a Thumb Down if you think it will bring in a certain type of music you'd prefer to not have on that station. Don't be afraid to rate songs (you can always edit your stations later if you don't like the direction your station is going or if you'd like to mix things up).

Finally, you can use Pandora Modes to customize your station experience when you're listening from a computer, mobile device or the Sonos app. You can pick different modes like Crowd Faves, Discovery and Deep Cuts. Be sure to Thumb Up songs you liked to inspire similar songs to play. I have a "Hip Hop Power Workout Station" that has suddenly started playing the Pirates of the Carribean, Interstellar, and How to Train Your Dragon sound tracks.

I've checked the station's thumbs up (only 2) and neither of them are anything related to any sound tracks (these or other).

It's really annoying to be in the middle of a workout and I'm inundated with sounds of the Black Pearl and Jack Sparrow. Come on... what's the deal?

I tried to select "Edit Station", but it's grayed out.

Why did the content on country rock radio change?

@mismsoona Nice to see you around the Community. 👋🏽

I'm happy to look into this for you, but I'll need a bit more information first. Can you write me back with the following?

@Didley1jt Thank you for reporting this.

I have escalated your feedback over to our engineers so they can further investigate.

Keep an eye out on this thread as I will provide you with additional information when I hear back from them.

In the meantime, please continue to thumb down any out of place tracks you hear on your Pop and Hip Hop Power Workout Radio station.

Thanks for your patience! 🤝

@Syclone I'm happy to look into this for you, but I'll need a bit more information first.

Can you write me back with the following?

I've been listening to Country Rock Radio for about 5 years.  The majority of the cuts are country with a mixture of southern rock.  This past weekend, (August 15/16) none of the cuts were country or my thumbs up.  I don't remember the specific tracks, but the artist being played were Neil Young, Bob Dylan, CCR, CSN, Eric Clapton, America, etc.  I was able to thumbs down the tracks but I just skipped a few songs and finally quit listening when I could not get to the normal tracks.  I wasn't using any special mode.  As of today, the station seems to be back to normal.

@Syclone Thanks for following up.

After taking a look at your Country Rock station, I'm not seeing any of tracks by the artists you mentioned in your list of Thumbs Down on that station: 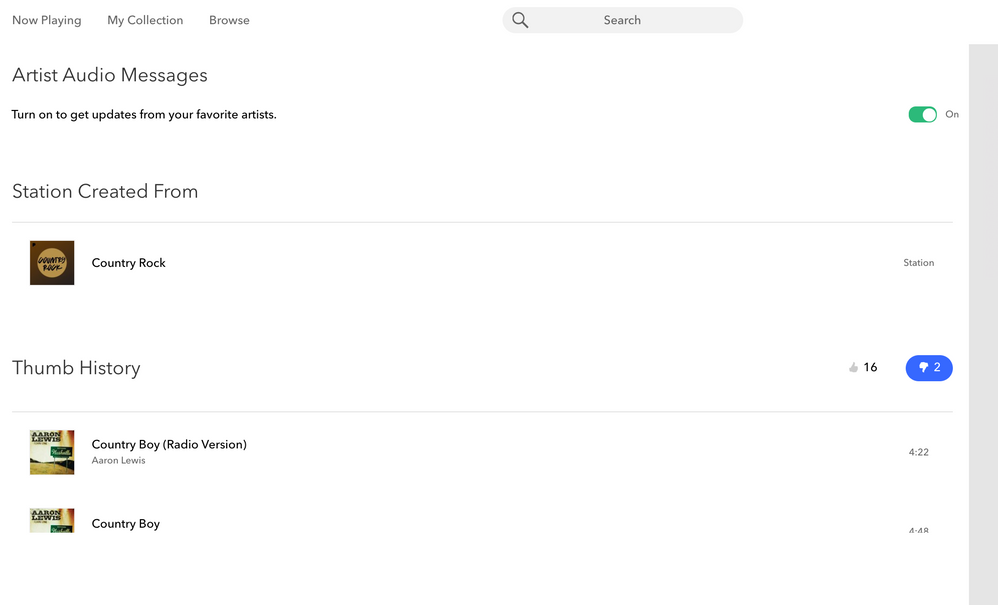 I do see you mentioned the station is playing how it normally should now.

If this continues to be an issue down the line, make sure to give any out of place tracks a Thumbs Down on that station, and reply back to this thread to let me know.

First post, but  it appear s to be a common complaint.  Prolly need to file this one under 'Hearing out of place tracks on station'

Why do even the basic jazz stations have such a weird and innappropriate *initial* play list?  C'mon, folks, when your customer selects 'Swing Radio' for_the_first_time_ (no 'thumb history' or any previous feedback) they should expect to hear, well, _swing_music_.  Not rock, not doo-wop, not 80's love songs.

Jeez people,  this is just not complicated.  Your songs must  be indexed (meta data?) and a simple search by song publication date would go a long way towards iimproving your customer's initial experience. A genre is defined by lots of things that most people understand - use that criteria please.  I don't have time to sit by this computer and thumb down all the seemingly random stuff that floats by.

I moved your post over to this existing thread to keep the community space organized: Hearing Out of Place Tracks on Station

Could you provide an example of what's happening?

Let me know and I can pass this info along. 🎧

It seems that Country Rock Radio is playing the wrong genre of songs again.  I have thumbs down over 100 songs in the last three days.  The majority are 60's and early 70's rock.  The station is playing a limited amount of country and none of my thumbs up.  This has been my favorite Pandora station for several years, I don't understand the change.  I would like to know which station I can switch to get my thumbs up and similar content to play.

@Syclone Nice to hear back from you.

I took another look at your station, and can see that since we last spoke, you've given a Thumbs Up to the following tracks:

I believe these three tracks may be skewing your station into playing the "wrong genre" of music that you described.

I recommend removing those tracks from your Thumbs Up list, and instead giving any new tracks that play by either of those artists a Thumbs Down.

If this does not resolve the issue you are experiencing, please make sure to reply back to this thread and let me know.

Thumbs up are definitely not station specific anymore.  I noticed the problem early this year and it seems to be why this thread is growing recently.

I have an old Christian Rock station (80's and 90's), an 80's music station, and a 00's Rock music (like Blink 182) station and the same songs are now showing up in all three stations.  I've used Pandora for years and this has never happened before, so it is a recent bug.

@JMcG I moved your post over to this thread since it sounds more in line with the issue you are experiencing: Hearing out of place tracks on station

Can you please write me back with the following?

I can't remember the names of the out of place artists or tracks because (1) I didn't recognize them or like them and (2) I hit the thumbs down button and it moved onto the next song.

I was able to give the tracks the thumbs down (as I indicated in my earlier post) to the point that I got a notice suggesting that maybe that station was not a good one for me.

I may have been using one of those modes, but I have no idea really. If it was, it was not on purpose.

The good news is that the station seems to be back to "normal" now, so I'm happy again:-)

@mismsoona Happy to hear things are back up and running again.

This is definitely a new problem this year, not sure what changed since SiriusXM took over, but the algorithm must have changed, how else can they explain such widespread and random cross-station contamination occurring for so many different types of genres? Very disappointing to have such a wonderful service become problematic for large numbers of loyal subscribers.

This seems to be happening to a lot of us. I've been a paid subscriber since the old Pandora One days (2007-8ish) and never had this cross-station contamination which now seems to be a regular occurrence. I've been speaking with friends and they are all experiencing the same issues too.

For folks listening to mostly mainstream music they might not notice as much when a random song gets dropped into their station, but when you have a bossa nova station that hasn't required thumbs up/down for literally 10 years to suddenly start playing Jason Mraz or Taylor Swift from unrelated stations something with the algorithm has changed.

Just because my wife likes songs on another station doesn't mean I want those to show up on my stations. About ready to ditch my subscription as there are SO many other options now compared to 2008.

@pnwfox Thanks for sharing your feedback.

To clarify, thumb ratings are station specific - so if your wife gives a thumb rating on one station, it won't actually affect any of the other stations you have collected.

That being said, it does sound like you are hearing some out of place tracks on one of your stations.

Can you please write me back with the following?

Is there something that limits the songs within a playlist on the AppleTV vs. the app on an iPhone?  I have the same issue as OP, on the phone I have a much greater variety from a playlist I've made, but when listening on the AppleTV it is probably playing the same 30% over and over, and then it actually begins to play unrelated music.  Just looking for clarification on whether there are indeed limits (maybe based on advertising or something?) within AppleTV or if it should be the same breadth as the app?