So I've subscribed to Pandora for years.  Had my stations curated pretty well, but then around when thumbprint radio was introduced they got messed up, things I had thumbed up in one station were showing up in another where I didn't want them.  After months of thumbing down these bad suggestions, the stations were largely good again...

Then a couple of weeks ago they started having a bunch of bad suggestions that didn't fit the station again. I don't want to go through months of trying to fix the algorithms again, is there a setting where I can get Pandora to not take in preferences from other stations? I'm starting to consider switching to Spotify if Pandora can't provide what they used to.

Could you provide more information about which stations you've noticed this with? What are the name(s) of the station?

Also, are you giving a thumbs down to the songs that you feel are out of place?

Have you used any of the Modes when this occurred?

Well I believe it is across stations but I at this point I only listen to a few well curated ones, so those are the ones I noticed it off. Reggae was the first one, Rap the second and also the Lil Wayne channel. What is interesting is that it plays none of the thumbed up songs that make up the channel, only new songs of other artists that I have never heard before.

I have not tried to use a thumbs down because I did not see the reason to recurate my channel. Sure everyone once in a while Pandora sneaks in a new song and that's great, but when 100% of the songs are new and of a different vibe than what the channel has thumbed up, thumbing down does not seem like a fix to the problem. Something else behind the scenes changed and that's why I, and the seemingly many other people above, are having problems with our years old stations.

I did not use any Modes or do anything different. It was literally one morning a different channel.

Thank you so much for trying to help.

@snktal Thanks so much for getting back to me with that information. I will be sharing this with our engineering and curation team on your behalf. If you notice anything else, please let me know. 🎧

@snktal Our engineering team has requested we gather some additional details from you.

For each station (Reggae, Rap the second and Lil Wayne), the next time out of place artists play that never have in the past, please grab screenshots and send those in a reply to this message.

Also, can you please confirm once more if Thumbed Up tracks you've given on those stations never play? Or do they play sometimes, but just not as often anymore?

Thanks again for working with us on this. 🤝

When it comes to Reggae channel (which was my regular channel in recent years) it's as if it is a completely new channel. If it does happen to play a thumbed up song, it will be one only and seems to be more of a random occurrence than as a fit of the "new" station. Because it was so off I switched to Rap which was really a 90s rap channel, but now is playing music from recent years mostly with an occasional classic. So not many thumbed up songs but does happen here and there. I then felt the need to check another old channel (Lil wayne) to see if it was just across the board affecting all channels and although it seemed to be a bit off to me at the time (not as bad as the other though), when trying to grab the screenshots today, I noticed most of the songs playing were thumbed up (as one would expect) so perhaps this channel is not as much of a concern as I originally thought. Please see attached screen shots for the other 2 channels. Please let me know if you have any more questions, thank you very much the help!

Thanks for following up, @snktal.

I ended up moving your post back into this thread: Hearing out of place tracks on station

You mentioned this was originally a 90s Rap station, however after taking a look on my end, I'm showing the station was created from our 2010s Rap and Hip Hop genre. However, it appears you may have renamed it to be Rap Radio some time down the line:

This would explain why that station is playing tracks from more recent years.

I recommend deleting that station, and instead creating a 90s Hip Hop station instead - you can find our genre station for that here: 90s Hip Hop

It looks like you sent over a screenshot of a track by 2Pac. Although you may have thumbed down some tracks by this artist, I'm showing you've also given a Thumbs Up to one or more of his tracks: 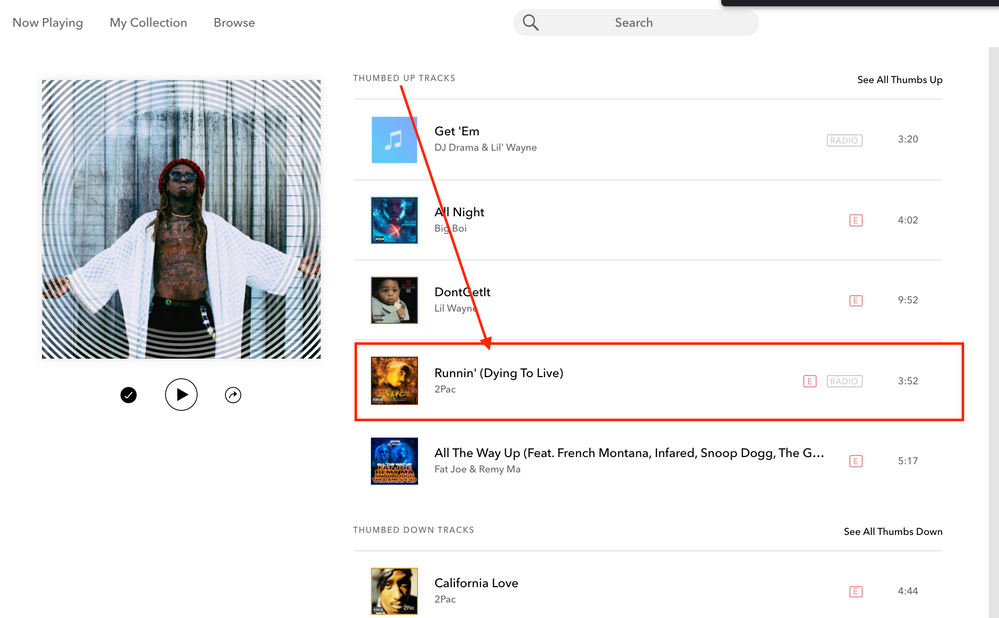 Pandora stations adapt with every song to try to find the right music for you. It does this by using a combination of the detailed information in the Music Genome Project, the station seeds and Thumbs feedback you have given along with feedback given by other listeners under similar conditions.

There are a number of variables that come into play when selecting the next song:

To improve your stations, here are a couple of things to try:

That track by Jo Mersa Marley doesn't appear to be an out of place track on that station.

I've taken a look, and I'm not seeing that you're rating songs with Thumbs Up or Thumbs Down on this station.

Pandora stations adapt with every song to try to find the right music for your stations. Without Thumb info, however, Pandora has to guess what songs you like or don't like, which can often lead to the problem you've described.

Keep in mind, Thumbs are station specific, so please feel free to Thumb up and down accordingly. Giving a Thumb rating on one station will not affect any of your other stations.

This also means that you can use Thumbs to craft the sound you are trying to achieve and vary the playlists from station to station. For example, you might want to give a song you like a Thumb Down if you think it will bring in a certain type of music you'd prefer to not have on that station. Don't be afraid to rate songs (you can always edit your stations later if you don't like the direction your station is going or if you'd like to mix things up).

I have an Alan Jackson country music station I frequently listen to.  About a year ago, my son added a Coldplay radio station.  I deleted that station shortly thereafter.

But now, when I listen to Alan Jackson radio, it constantly gives me coldplay tracks.  I always thumbs down them.  But Pandora insists on playing them even though that station has not been on my list for a year.

I'm ready to just cancel my subscription because it's so annoying.

I gave this a thumbs down

Can you please help?

@al123456 I moved your post over to this thread: Hearing out of place tracks on station

After taking a look at your Alan Jackson Radio station, I found that you have added an errant seed, Viva La Vida (Live 2012) by Coldplay, to that station. That's why you're hearing tracks that don't fit.

Here is a screenshot of where I am seeing this errant seed:

You can delete the bad seed by editing your station.

My songs all have been un thumbed.. 1..Usually it has a thumb station where all my songs that I selected thumbs up should be played. 2..other songs from other stations that I have thumbed play on other stations that have nothing to do with that type of song or music. It's all like discombobulated..Since Pandora wants you to subscribe..they've done this. They are not playing new songs..& are playing re/plays..It's terrible..& yes their listening to you..reading your messages..

@Lovely21_ Nice to see you around the Community.

Station where all of your Thumbs Up ratings are played:

I believe you are referring to Thumbprint Radio, and I'm showing that station is still a part of your collection: 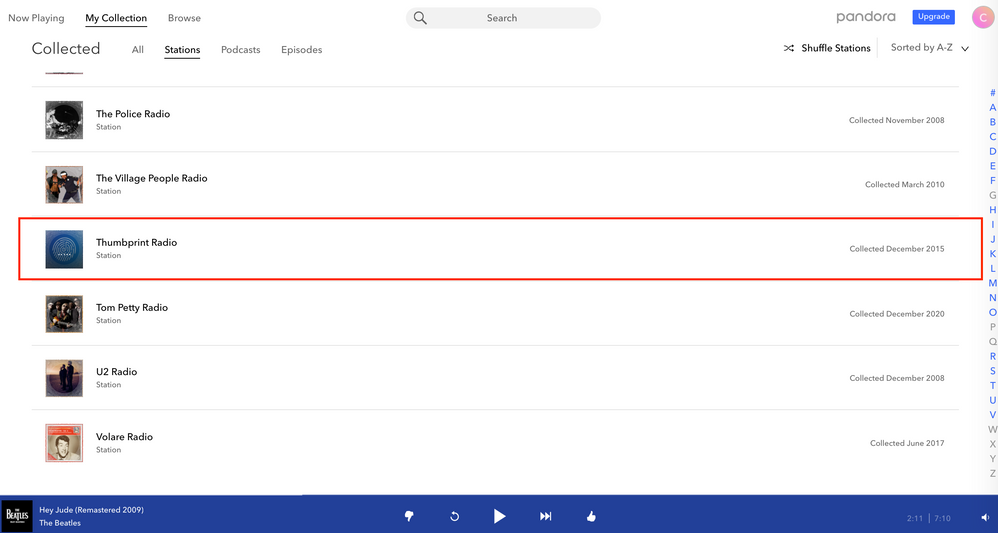 Let me know if you are running into any issues playing this station.

Out of place tracks playing on your stations:

To clarify, are you having issues with wildly out of place tracks playing on one of your stations?

If so, the next time this happens, can you please give that out of place track a thumbs down and then write me back with the following?

Thanks for working with me on this.

Don't feel bad, the Alkine Trio (Punk Band) had a song on the muppet movie sound track now I keep getting little mermaid songs in between dead kennedys and F.E.A.R. songs. Annoying as hell.
My favorite one so far was Smut Peddlers - If you're gonna be dumb, a song about shooting drugs and fighting followed by some song about snowmen from Frozen...

@SrgtOfStomp To clarify, are you having issues with wildly out of place tracks playing on one of your stations?

If so, the next time this happens, can you please give that out of place track a thumbs down and then write me back with the following?

Thanks for working with me on this.