GSOTD (Genre Songs Of The Day) (Clean Only) 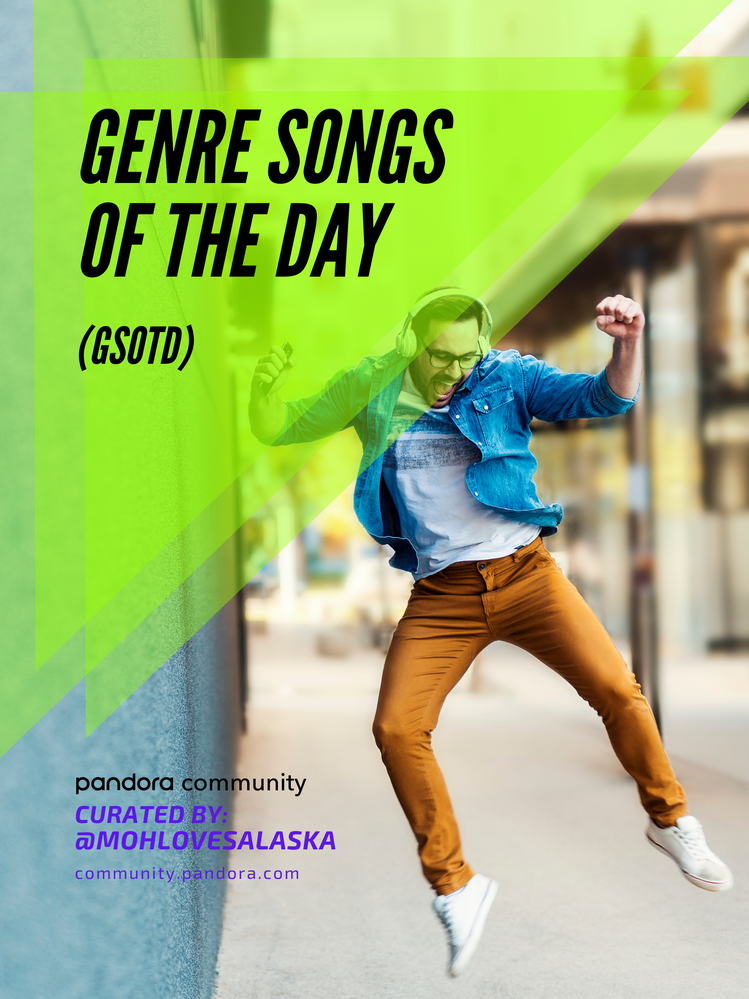 Easy Listening: Unchained Melody by The Righteous Brothers.    https://pandora.app.link/Dc5m2aGfIab   The repertoire included some of the Righteous Brothers' best-known songs, such as "You've Lost That Lovin' Feelin'," "Soul & Inspiration," "Unchained Melody", but also the later "Rock and Roll Heaven", as well as Bill Medley's "The Time of My Life".

Country: Making Believe by Emmylou Harris.  https://pandora.app.link/gIxYpUOfIab   Emmylou Harris is an American singer, songwriter, and musician. She has released dozens of albums and singles over the course of her career and has won 14 Grammys, the Polar Music Prize, and numerous other honors, including induction into the Country Music Hall of Fame. In 2018 she was presented the Grammy Lifetime Achievement Award.

Christian/ Christian Contemporary: How Can It Be by Lauren Daigle.  https://pandora.app.link/NaW39ulgIab   Lauren Ashley Daigle was born on September 9, 1991. Daigle grew up in Lafayette, Louisiana in an environment of zydeco, Cajun, and blues music.

Rock/ Rock-n-Roll: She Talks To Angels by The Black Crowes.  https://pandora.app.link/4UlhkOXgIab   This is regarded by many as The Black Crowes' best and well-known song. It hit number one on the US Album Rock Tracks chart and number 70 on the UK Singles Chart in 1991. The eighth track on The Black Crowes ‘ 1990 album Shake Your Money Maker and one of the singles from the album.

Here is the GSOTD Playlist. 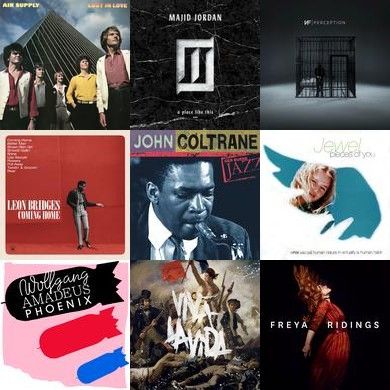 Good Wednesday morning, I will be adding three songs to the GSOTD post and playlist. Have a great Wednesday, enjoy the music.

Country: More Of You by Chris Stapelton &  wife Morgane. More Of You   Stapleton’s wife Morgane joins in harmony vocals. This is a Chris Stapleton original, co-written with Ronnie Bowman. Stapleton is a country classicist, so his songs often sound more like songs from the mid-20th century than they do like other modern country chart-toppers.

Indie Folk: Fit In by KT Tunstall. Fit In   “Fit In” by KT Tunstall was released on May 5, 2017, as part of the soundtrack for the long-delayed film 3 Generations (formerly titled About Ray). The film revolves around Ray, a trans teenager who wants hormone treatment, played by Elle Fanning, and deals with his exploration of and struggle with identity and coming of age as does the song.

Good Thursday morning, for GSOTD for today I will be posting three songs as well as adding them to the GSOTD playlist. The first two songs that I will be adding are coming from @kayden_S and the SOTW (Song Of The Week) post. So when you get a chance pop on over to the SOTW post and check out the music that has been posted there thus far, @kayden_S would surely appreciate your support. Have a great Thursday, and enjoy the music.

Country: Believe by Brooks & Dunn. Believe   "Believe" is a song written by Ronnie Dunn and Craig Wiseman, and recorded by American country music duo Brooks & Dunn. It was released in October 2005 as the second single from their album Hillbilly Deluxe, and it won the Country Music Association's 2006 awards for Single of the Year, Song of the Year, and Music Video of the Year.

New Age: Lamentations Of The Heart by Philip Wesley. Lamentations Of The Heart   Philip Wesley is a composer and keyboardist who specializes in tender solo piano pieces. His recordings have appeared on various new-age streaming and sales charts. Wesley began pursuing music as a profession at the age of 20 and self-released his first LP, Finding Solace, in 2002. Several albums followed on Autumn Music, beginning with 2004's In a Lifetime and 2005's Comfort and Joy.

thanks for the shoutout @MOHLovesAlaska.

@kayden_S I wish you well on a very speedy recovery, you take care and stay safe.

thank you and you stay safe as well

Good Wednesday morning, I will be adding four songs to the GSOTD post and playlist. The first song that will be added is brand new this week, it has been requested by the artist himself Mr. Phil Klein ( @philmobet ) the title of his new song is With and Without You (Reimagined) (Single). I have listened to this piece myself and I must say it is a real sexy Classical Jazz piece, I know you will also enjoy it. Have a great Wednesday, enjoy the music.

Classical Jazz//Bluegrass: With and Without You (Reimagined) (Single) by Phil Klein ( @philmobet )  With and Without You (Reimagined)    Phil’s music has been played over 10,000 times on US and European television and over three million streams on Pandora radio. His recordings feature the cream of SF Bay Area musicianship including current members of Santana, Tower of Power, The Yellow Jackets, and The Doobie Brothers.

Christian Contemporary//Gospel: Believe For It (feat. Lauren Daigle) by CeCe Winans.  Believe For It   Nashville, TN  Grammy-winner Lauren Daigle joins the iconic CeCe Winans for a powerful rendition of Winans #1 hit “Believe For It". The fan-favorite song about belief and trust is completely re-imagined as Daigle and Winans combine their illustrious vocals. Winans says, “Having Lauren record ‘Believe For It’s with me was a joy. This song touches every generation, and having Lauren join me will help spread the powerful message of faith even further.”

Good Friday morning, I will be adding three songs to the GSOTD post and playlist, have a great Friday, enjoy the music.

Pop: Let It All Go by RHODES & Birdy. Let It All Go   The song was written and produced by Rhodes and Birdy. The music video for the song was published on the official Birdy YouTube channel on 11 August 2015. It was filmed in Edinburgh and features Birdy and Rhodes singing in a purple valley. It has currently amounted to over 71 million views.

R&B//Pop: Crazy In Love by Sofia Karlberg.  Crazy In Love   Karlberg has said that her biggest inspiration when it came to her music were Amy Winehouse, Christina Aguilera, and Gerard Way. She signed a record deal with Universal Music in 2016 and has released an original EP titled “Spotless Mind”. Karlberg became a viral sensation when she covered Beyoncé's song " Crazy in Love ".

can you use diesel by granger smith and earl dibbles jr.?

Suge
Diamond in the Rough

Good Wednesday evening, I do apologize for not posting the last couple of weeks, but due to unexpected circumstances I have been facing difficult obstacles', I will be back soon to continue posting. I thank you for your understanding as well as your patience. Take care and stay safe.

Hope everything is okay. 🙏

Hopefully, we can do this again sometime tomorrow, take care and stay safe.

Nice to see you back, and I'll make sure to check these tracks out. 😎

Good Thursday afternoon, for GSOTD for today I will be adding three songs. Have a great Thursday.

Soundtracks: Saturn by Sleeping At Last. Saturn  Sleeping, at Last, is a musical project led by singer-songwriter and multi-instrumentalist Ryan O'Neal. The project initially began in Wheaton, Illinois as a three-piece band with Ryan O'Neal as the lead singer and guitarist, his brother Chad O'Neal as the drummer, and Dan Perdue as the bassist. The band independently recorded their debut album, Capture in 2000, which they used to attract the attention of Smashing Pumpkins frontman, Billy Corgan.

Reggae Pop: Memories by Maroon 5.  Memories  "Memories" is a song by American band Maroon 5, released through 222 and Interscope Records on September 20, 2019, as the lead single from the band's seventh studio album Jordi. Lyrically, the song pays homage to the memories of a loved one who has since passed.

@MOHLovesAlaska I just wanted to let you know that I collected the GSOTD playlist on Pandora. I'm actually listening now. Gettin Jiggy Wit It is playing right now. Haven't heard that in quite a while.

I have an awesome suggestion. I'm listening to my "Straight No Chaser" Station. Their version of "Under The Bridge" ( originally by The Red Hot Chili Peppers). Check it out

@UncleBud thanks for the recommendation, I will for sure check this version out, just as soon as I finish my Music History post. Take care and stay safe.

@Misnicole if you have any requests for the GSOTD post please leave your request here and I will be sure to add it but please tag me so I know you left me a reply. You take care and stay safe.