Thank you @MOHLovesAlaska for letting me take over this. So since it's the first day on the job.  All the songs we have for today are pretty awesome and so many of the suggestions are new for me. So I got to listen to something new today. Lucky me. Maybe some of these songs are new for you too. I hope everyone enjoys this week's list of songs. And feel free to ask questions.

(Oh and for a quick heads up links aren't really working for me today for some reason but, I am trying my best to work with that)

⚠️WARNING THESE SONGS ARE EXPLICIT ⚠️

Misunderstood by Russ an  Everything by Alanis Morissette

Yeah I know i'm surprised too. These spots are actually tied, because I agreed to give both the first spot to @MOHLovesAlaska (who choose Everything by Alanis Morissette) and  @ErickPandora (who choose Misunderstood by Russ)but then  I realized at the last minute oh my gosh i agreed to give both of the peeps the number one spot for playlist but, Misunderstood by Russ is not an explicit song so it cannot go on the explicit only playlist,but since  i still wanted to share this song so it will go on another playlist i will be working on called ¨Have you heard this?¨ (which will be coming soon) And this song will be the first song to be at the top of that playlist.

Got Me Floating by 423 kidk
This song is  recommended by @SpacedOut1  This was a new song for me and I actually like this thank you!

This song was  recommended by @nichole6747  who had gave out an awesome playlist of ¨ A bunch of random rap songs put together¨ ( i cannot link the direct playlist i am unable to i'm sorry). J Cole is one of the greatest.  His song Middle Child is awesome too!

This song was also from @nichole6747   and, it is on Nicholes playlist of ¨A bunch of random random songs put together¨ ( I can not link the direct playlist i am unable to i'm sorry) btw I am a huge fan of Post Malone he is one of my favorites.

This song was recommended by @Oshawott (me lol ).This is a new song that was released a couple days ago like around last friday its by Machine Gun Kelly and CORPSE aka CORPSE HUSBAND Everyone Knows MJK but, imma say CORPSE is a new star. He is known from youtube as the ¨deep voiced scary teller¨ or the ¨Among Us Guy ¨ but he is also a rapper. I don't know how I found myself actually enjoying this guy but Twitter is pretty powerful when it comes to making me try new things .I'll say CORPSE has a pretty unique style and I love it.And his lyrics are I can relate to them.

Okay that's it for this week thank you for checking this out soon this will get better. Feel free to ask questions. and Don't forget YOU can still give your suggestions in the EXPLICIT PLAYLIST SUGGESTIONS in the community chat .

And please don't forget✨ Life's a journey not a destination✨

Wow it's Wednesday the middle of the week. I havent been up to much lately but I did find a new podcast to listen to. It's called The Lost Journals by Fear FILM Studios Podcast Network. It's not a scary podcast I find it really funny but that's possibly because I have a weird sense of humor.  I'll admit listing to this makes me feel like i'm reading a good  Webtoon there's not much details its just really straightforward. You can tell that the story is really planned out and all the main events really carry on the story. The main character Alister Kane really reflects on himself and tells the story i'll say the voice actor is really good. Idk why I keep listening to this. But I think its because its fast paced i can keep up with it. Each episode is like 10 minutes.

Okay well I think that's enough podcast talk for now. I should get on with today's selections. Most of these songs are from the Rap Song Suggestions that @onniebaby   started in the chat. And many people added on and gave a ton of suggestions.  So here we go. 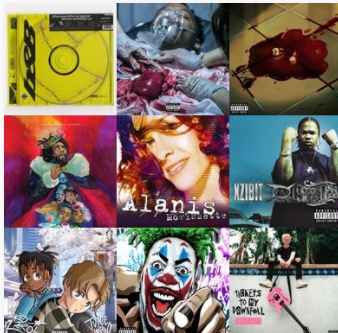 OLD ME by 5 SECONDS OF SUMMER

I stumbled upon this by accident im not sure where I found this exactly but last week after I had finished last weeks explicit only playlist I decided to go and find something else to listen to and I believe I just found a random Pandora Radio Station and played it and I found this song. I haven't listened to 5 SECONDS OF SUMMER in ages and so when I heard this and I was like oh this is pretty neat.  This song gave me a chance to look at myself and say why haven't i taken enough time to just thank myself because i can relate to this .

This song is actually pretty popular. I'm surprised this hasn't made my playlist until now. Its catchy too. This song was from @FPC5150  DRIP CITY PLAYLIST which I encourage everyone to check out because this playlist has several great songs on here.

THROUGH DA STORM by POLO G

this song was from @Lovewolfie  MY RAP PLAYLIST. thank you for this playlist @Lovewolfie i've never heard of POLO G until now  and this flow in this song is pretty smooth. and this song is i believe a song everyone can relate to somehow in their own way

Get past the first few lyrics trust me this is worth it  they hype turns up a bit not to much but just enough  this collaborations reminds of a collab that would possibly take place on soundcloud I wonder how these two artist got together to make this song.  This is from @FPC5150   DRIP CITY PLAYLIST also @FPC5150  used to hang out around here in the community.

MURDER ON MY MIND by YNW MELLY

Have you ever been a car with like the big bass boom speakers where the music is loud enough to like where you can feel the bass. This is the song you would play you would play in that car. This song is from @Lovewolfie  MY RAP PLAYLIST.

You won't forget the title of this song ever after hearing this song.  Every time I hear this song I  began to like it more.  But I guess that sometimes what happens when you give things a chance.

Alrighty peeps that's it for this week i've got tons of school work to do today. I hope everyone enjoys these songs and don't forget to look forward to next week's selections.

Thanks for sharing, @Oshawott. 👍🎧

Hello everyone this weeks selection are currently being put on hold im trying to pull something together and i've been working on this for 2 hours but i still need more time. i've been having  a ton of tests and school work today and throughout the week but  haven't caught up yet. please excuse me and thank you.

@Oshawott, I'm sure whatever it is you are putting together will be worth the wait. I wish you the very best in your schooling as well as your upcoming tests. Take care @Oshawott and stay safe as well.

@Oshawott there is an artist that has requested for their music to be posted. I will post the link here, all the music is explicit in nature. I will tag them so they know their music is here. When you make a new playlist you can add this music to it as well. Take care and stay safe.

@Oshawott here is the link for @Lbceeno the music artist's music.  Lbceeno Music. When you get your playlist going please be sure to add this as well. Thank you @Oshawott you take care and stay safe.