Pandora Community
Sign In FAQs
Turn on suggestions
Auto-suggest helps you quickly narrow down your search results by suggesting possible matches as you type.
Showing results for
Show  only  | Search instead for
Did you mean:

Marvel Entertainment to Produce Scripted Podcasts for SiriusXM and Pandora 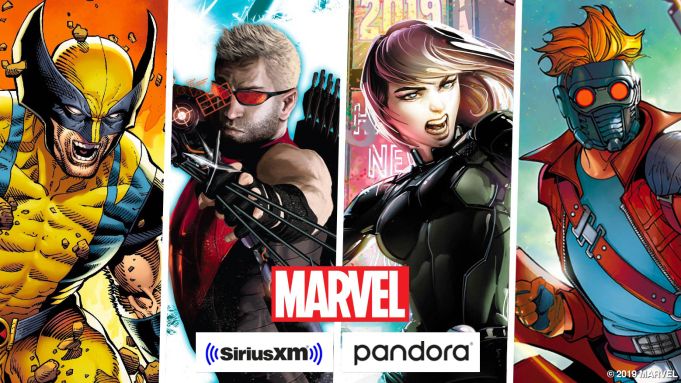 The Marvel universe is expanding. Marvel Entertainment has set a multi-year deal with SiriusXM and Pandora to produce original, scripted podcast series based on their superhero characters, Marvel and SiriusXM announced Tuesday.

The podcasts will debut through SirirusXM and Pandora’s podcast channels beginning in 2020 and will each be 10 episodes long, focusing on original stories on the characters Wolverine, Hawkeye, Black Widow and Star-Lord, as well as a fifth series in which all four team up.

The deal also includes plans for unscripted talk shows and interview shows featuring celebrity guests, as well as themed live events, all of which will premiere in 2020.

“Powerful stories are read, seen, and heard – and we believe audio is the next natural step to bring the Marvel Universe to fans around the world,” Dan Buckley, president of Marvel Entertainment, said in a statement. “Storytelling has always been at the heart of Marvel’s success, and SiriusXM and Pandora have the right platform and expertise to bring Marvel’s rich tapestry of stories to listeners in a whole new way. We are excited to introduce an impressive roster of programming with SiriusXM and Pandora, and we can’t wait to share more details in the weeks and months to come.”

“Whether in movies, TV or other media, Marvel has been a success everywhere it goes, employing a level of quality and pop culture brilliance that organically draws massive audiences, and they are bringing that creative genius to SiriusXM and Pandora,” Scott Greenstein, SiriusXM’s president and chief content officer, said in a statement. “We chose Marvel for our first major foray into creating original podcasts, and are thrilled to have Marvel create new audio programming and curate top quality podcasts for SiriusXM and Pandora. Under our new creative collaboration with Marvel, we’ll now provide our subscribers and listeners and Marvel fans a breadth and depth of podcasts that will be an immersive adventure into the iconic Marvel universe.”

Marvel Entertainment already produces several podcasts, including the unscripted shows “This Week in Marvel” and “Women of Marvel,” as well as scripted series like “Wolverine: The Lost Trail.” And SiriusXM and Marvel previously teamed up in August to air a music station and channel in celebration of Marvel’s 80th anniversary and Marvel issue #1000.

Once available, SiriusXM subscribers with streaming access can listen to all Marvel podcasts at home via smart TVs, Amazon Alexa devices, Apple TV, Sony PlayStation, Roku, Sonos speakers and more. Pandora users on both free ad-supported and Premium subscription tiers of service will also be able to hear all Marvel podcasts on the Pandora mobile app for iOS and Android.

Welk, B. (2019, October 22). Marvel Entertainment to Produce Scripted Podcasts for SiriusXM and Pandora. Retrieved from https://www.thewrap.com/marvel-entertainment-to-produce-scripted-podcasts-for-siriusxm-and-pandora/