Born in 1931 to a Baptist minister and his wife, Sam Cooke’s early musical development took place in the church. Like other early figures in what would eventually be called “soul” music, Cooke began his professional career singing gospel. A member of the legendary Soul Stirrers since the age of 19, Cooke was given permission by his record label to begin recording secular music in 1956. “You Send Me” (1957) was Sam Cooke’s first pop smash, and it was followed by such classics as “Chain Gang” (1960), “Cupid” (1961), “Twistin’ the Night Away” (1962) and the Dylan-inspired posthumous release that became an anthem of the Civil Rights Movement: “A Change Is Gonna Come” (1964). His voice has been called the most important in the history of soul music, but just as important to Sam Cooke’s historical standing is the fact that he also wrote all of the aforementioned hits—a remarkable fact for any popular singer of his time. 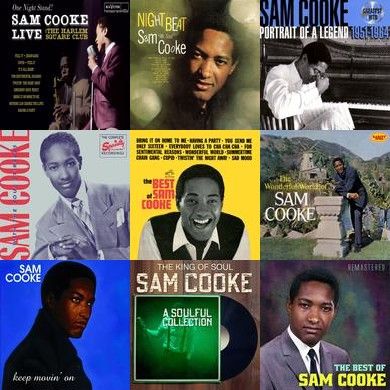