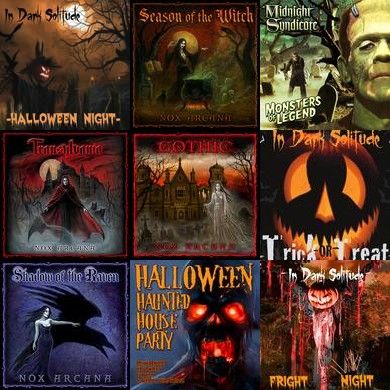 Since the radio feature is a bit on the fritz, right now - I'm currently working on fine-tuning the playlist. I'm trying to avoid duplicates, and it should preferably be FX heavy. If the background music sounds somber and depressing, rather than spooky and festive - then I don't include it. I also don't like big-beat club music as Halloween background music, which I've seen too much of. Some of the tracks included don't even have background music or very little of it, which also works. Preferred Halloween instruments are the pipe organ and a music box. A piano usually just doesn't cut it. I also try to avoid excessive screaming noises, and a chainsaw is a deal breaker for me.

Lemme know if you spot something that should be included!! ❤️

Suggestion to Mods: I think it'd be cool to also have a radio station devoted to Halloween sound effects. For some reason, many of the artists that I used for this playlist seem to not be available for radio.

I know you have Scary Halloween Sounds as a radio station. I think, if possible, it'd be cool to have the tracks also available for playlists and/or other radio stations.

Thanks so much for your suggestion, @blues-sevenfold.

You may already know this, but we also have some Halloween genre stations that can be found here.

In the meantime, it sounds like your playlist would be great for Halloween tunes.

Keep sharing your faves, and see ya around the community! 🎃