- Kpop or Jpop- Album of the Week

How are you doing? As you can see this is a new playlist I'm working on.  And it's dedicated to Kpop.

I will use this list to help others discover Kpop and Jpop music. Since I'm a huge fan I really wanted to share this.

Each week ill try to pick a new artist on rare occasions there may be the same artist but with a different album.

Feel free to recommend any albums that you know also.

Who is ready for our first album to be added on here!

Our first album is Got Love by GOT7  https://pandora.app.link/HELQMz9sUib 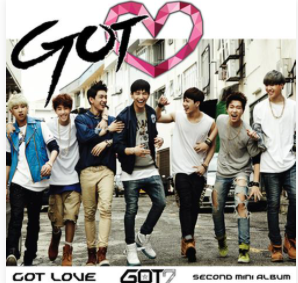 This album I discovered today after hearing from a friend that this group was another persons favorite kpop group and I decided well how about I give these guys a listen this group consists of seven members here's a few facts. about them.

This albums  genres are actually wide range from, Kpop hip-hop, trap, and R&B

And they released their debut album in 2014.

This album is their second album.

JB helped in writing the lyrics.

What I like about this album is its upbeat tempo. At first, I didn't expect to hear this after listing to their first album yesterday. To be honest I expected something less hype and a slower tempo. but every song is on point. From A's fast danceable beat compared to forever young slow R&B tempo. you get the perfect mix of songs if you want to listen to an album where all the songs don't sound the same listen to this. You can get quite a variety.

@Oshawott I am not familiar with this group, but I will make sure to check out the album.

Well, a full week hasn't passed yet and I'm obviously not posting on a Saturday. But since I plan on going somewhere on Saturday and il be busy that day.  I decided why not do this weekly post today.

today's album of the week was going to be a Korean band doing a Japanese album but there was a change of plans and I decided to do someone else. Because I kept listening to that someone's station and my favorite song from my favorite album from them showed up and I was like why not the other one can wait.

I discovered Ateez by a coincidence. My favorite Tiktoker's sister kept mentioning Ateez on her Twitter and how she was such a huge fan of them. Curiosity got the best of me and I'm glad they did because Ateez has become my second favorite kpop band.

Anyways that's enough about my discovery journey lets talk about the album. So this album genre is in between Kpop, hip-hop, and R&B. This album was released on October 8th, 2019. The genre mix is perfectly spread out on this album giving you a smooth listen. (I hope to buy this album.)

Well, I had to keep it short and simple. That's it for this week and don't forget to look forward to next week's post I have a surprise for you all. (Hint the next album is from my number one favorite K-pop group their pretty popular so you may know them.)

Thank you for checking this out I really appreciate you for that.

Hi! Maybe you haven't heard of them but I really recommend checking out MCND! They're a hip hop based group with some really good hard hitting songs.

This album is my fav! hope you enjoy 🙂

Hey since I'm around.  I decided why not drop by with add another segment to this selection.

Today we will be going over MCNDs album MCND AGE.

The genre of this album is Kpop

The songs on this album are

This is short and simple and has a super hype beat that's perfect for dancing to. but when you get to the second song of the album you are not aware of a song change so this flows perfectly.

This song should've had a collab with got 7 that would give this even more fire.

When I saw the title of this song I thought this song would be loud but I was wrong this is pretty smooth and almost low.

I'm getting Ateez vibes from this song

I have always seen the outro last this shocked me I see some originality here.

I thought this was over.