I am unable to edit my stations because the edit button is grayed out.  How do I fix this? Yep same.  their programmers have to have their head up somewhere foul

@wildstarsreach It sounds like you may be attempting to edit a genre station.

If you'd like me to verify, let me know what the name of the station is, and I'm happy to look into it further.

I just discovered exact same problem also.  So, I pay $109/year for a Premium subscription, and I started a station from seeds myself, the name of which is "What Nadine Likes Not What She Doesn't" so... pretty clear that one is NOT a genre station.   Unless I personally have become a genre?  I am entirely unsure what the point of the $109 I am paying is if I cannot edit my station and continue to add variety, and if the years I have put into curating that station is now down the tubes.

@nadschwa Our support team has taken a look at your station and has confirmed that it was originally created as the Adult Alternative genre station.

It then appears that you later renamed the station to be What Nadine Likes, Not What She Doesn't.

This can be confirmed in a couple of ways - the first of being by going to the station details page. You can see below that Adult Alternative is listed at the top of the Station Created From section: 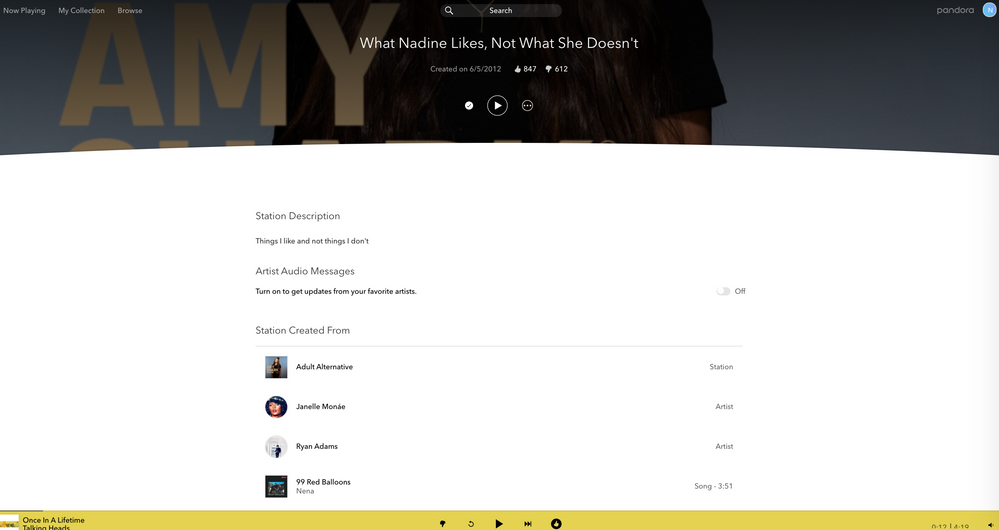 This can also be confirmed when attempting to search and start a station for Adult Alternative. You can see below that searching Adult Alternative will already show that the station has been added to your collection, and if you click the play button, it will actually begin to play your What Nadine Likes, Not What She Doesn't station. 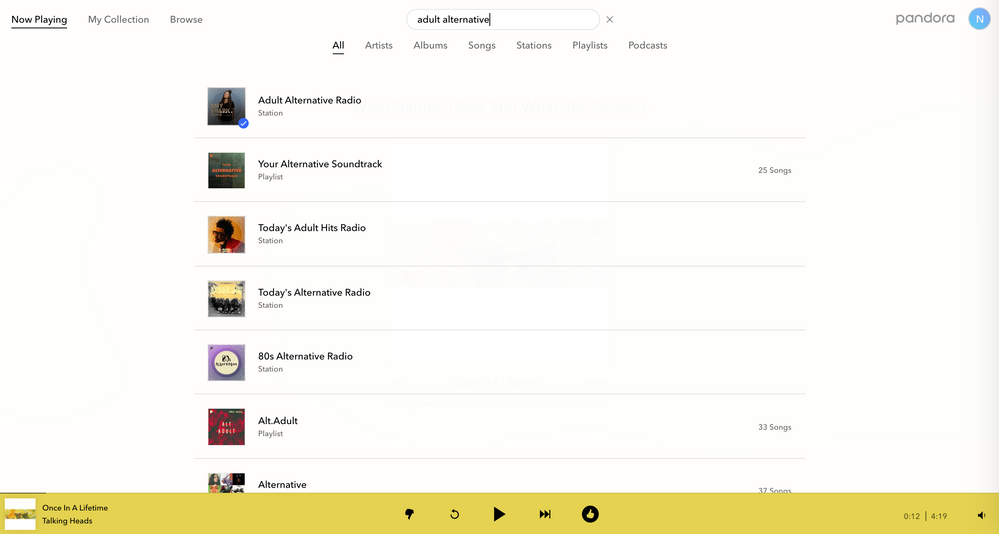 While there was once a bug that allowed users to add additional artist/song seeds to their Genre stations, that bug has since been resolved.

At this point, it is no longer possible to edit the name of these stations, or to add variety.

In the meantime, feel free to create a feature request for your suggestion of editing genre stations here. 💡

So the exact problem that pandora was trying to prevent happened with my halloween party radio station. I added a song to the station seed and it was a mistake. it was a children's pumpkin song that I thought was cute at the time and now half the station is generic children's music and I can't delete that seed.

Reading more about it, with other people having the same problem, it seems like you should just make people make a new station (rename it so it's not the same as a "genre" station name so we can keep our stations we've been using and editing for years but not edit the ones pandora creates.

@c_d_fris While you are no longer able to edit your Halloween Party Radio station, what I can do is escalate this over to our support team so that they can help remove the unwanted seeds that were added to that station.

Let me know the name of the song that was added as variety to that station, and I'll be happy to pass this along to them so they can further assist.

Yeah, I can't edit some stations, either.  Didn't realize you can no longer do that, and didn't also realize some of my stations were genre ones.  I wanted to add variety to my Christmas(actual name) station just now, like the songs My Christmas List by Simple Plan, Mary Did You Know by Kenny Rogers(feat. Wynonna), and the Jaqi Velasquez version of the Chipmunk Song, but now I can't...  I used to be able to, and I really didn't see that as a bug, and I still don't.  Please change that back so we can edit all our stations, not just certain ones... 😒

@JNeutron1 Thanks for sharing your feedback on this Community.

If you'd like to see this as an option on Pandora, I recommend upvoting this existing feature request with a ❤️, as well as leaving a comment with your specific suggestion: Ability to Edit Genre Stations

"That's because Adding Variety could change your listening experience on these stations".

Yes.  Indeed.  That is precisely WHY we want to edit it. *facepalm*.

Not sure there's actually a valid user oriented reason why this feature wouldn't be allowed.  At a minimum show us how we can take a genre station and make it our own and alter it from there.

I used the bug years ago to add some genres to the titles of the genre stations be able to sort them how I wanted.  I understand that they cannot be changed now.  However, I would like to remove the part of the title that I added and just have the station title be what Pandora named it.  Hope that makes sense?  Can I do that?  I just want them to be what Pandora named them, not what I changed them to.   I've tried deleting the station and re-adding it, but the title that I created is still there.

@chadp1001 Unfortunately, there isn't a way to revert your station back to its original name.

If you'd like to see this as an option on Pandora, I recommend upvoting this existing feature request with a ❤️, as well as leaving a comment with your specific suggestion: Ability to Edit Genre Stations

I apologize, but I have to concur with the other users saying they had individual stations that have turned into genre ones or changed names without permission. This is not always users accidentally clicking on a a genre station. My Chasing the Sun station was turned into "Pop and Rock," and while it hasn't so far treated it as a genre station and still lets me edit it, it had changed the album it pulled the original seed song from. I had Chasing the Sun from a single release version of the song, and it switched it to the same song listed on a dance compilation album, changing my collection cover image to the album cover with a scantily clad woman the same time it changed the station name. I've since deleted that seed as I'm tired of looking at it, but the collection is still labeled "Pop Rock" even though I have never named it as such. I never sought help on it because it still let me edit the station, but it's a shared experience.

Similarly, my Puddle of Mudd station is now called Metal/Rockand changed whatever album used to be displayed.

The best guess I can come up with is that the original seed becomes unavailable, or, in cases like my Chasing the Sun one, Pandora's system bugs out the album/single it's pulling the seed song from, when multiple are available. It then doesn't have the original seed song in there and gives it a genre name in replacement.

@caldella Can you please try re-naming your stations back to what they originally were?

If they end up reverting back to Metal/Rock and Pop Rock, please follow back up and let me know.

I will, though it could be literally months + if anything happens. Again, this change happened for me a LONG while back, possibly when the channel tuning came in.

I've also noticed my one that was originally named after Benjamin Britten became "Regency and Classical" somehow. That probably happened around the same time. I'm wondering if it has something to due with altering how new stations are formed. I can no longer start a new collection from an individual artist, as I did when the account was new. It seems I have to pick one of their songs instead. Or if I can, I don't see how. The stations that changed seemed to mostly be ones named after artists instead of songs.

@caldella You should still be able to create new stations based off of an artist.

Can you please give me an example of an artist you are unable to create a station for?

Also, what is the make and model of the device you are using to stream Pandora?

Perhaps a correction is necessary on my side. If I recall, the button to start a station from an artist used to be a Play icon either over the artist’s icon or directly below it. It seems that is now some “Play Top Songs” option. There is a station button, but it’s been shoved to a smaller position to the left. I’m assuming this happened a long time ago, since all these station issue names and such also are old. While I have had Pandora refuse to start a new station for artists in the past from the “Start Station from Artist” button while on my main page, I couldn’t tell you precisely who. Again, we’re talking months-old information at the earliest, perhaps a year + at this point. I probably just gave up looking into their music and forgot about them because of it. And I don’t want to steer too far off the original concept of this thread. The point still stands that some of my personally-created stations had their names etc. changed a long time ago without my doing, around the time the Station Tuning was rolled out. So it’s not entirely users selecting genre stations instead of starting their own. Whether or not this issue will spring up again in the future shall obviously wait to be seen.

I'm streaming online from the newest version of Firefox and always have. Do not have permissions to download any apps etc. on this device.

Thank you for this additional information, @caldella.

If you haven't already done so, please try re-naming your stations back to what they originally were?

If they end up reverting back to Metal/Rock and Pop Rock, please follow back up and let me know.

I'll be happy to look into this from there! I'm having trouble with a station too. It's called "Instrumental Hip Hop."

I do see a station named Suspenseful Instrumentals in your collection.

Is that the station you are having trouble editing?

Additionally, what exactly did you need help editing? 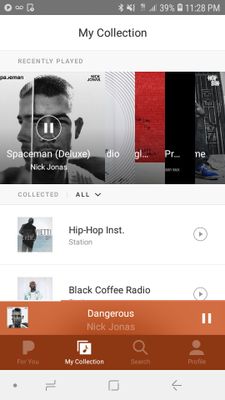 My apologies, I named it "Hip-Hop Inst." sometime in the past. Now I desire to change it back to its original "Instrumental Hip Hop Radio" name, but it won't let me.