Songs cut off before they are finished

I also find the cutoff on the end of the song really abrupt.  Many of the songs I listen to don't finish before Pandora cuts it off.

@Septe Thanks for following up and clarifying that with me.

Could you tell me a bit more about what is happening? Are you listening to Pandora on a computer or on a device?

@Septe Thanks for following up and clarifying that with me.

Could you tell me a bit more about what is happening? Are you listening to Pandora on a computer or on a device?

Hmm...I thought I answered this but I don't see my answer so...

4.  Again, it's a particular song(s).  I'll have to listen to the songs to see which ones get cutoff and report those.

@Septe Thanks for following up.

If you're listening from our website, what browser are you using? (Ex: Google Chrome, Firefox, etc)

Let me know and I'll make sure to send over some troubleshooting steps for you to try out.

@Septe I moved your post over to the Desktop space since this issue sounds specific to your computer.

Please use one of our supported browsers for listening to Pandora, like Firefox, Chrome, Safari, or Internet Explorer.

You can find the minimum specifications to run Pandora on the web here.

Another alternative is to try out the Desktop app, if you're interested.

Again, a case of not reading what I'm saying.  Pink Floyd Brain Damage on Pandora is cutoff.  Pandora shows Brain Damage to have a running time of 3:46.  It's too short when the actual run length 5:54 or even longer depending on the version.  There are other songs that have been cutoff and I'll post them as I go along.

@Septe To clarify, does the track show that it should have a run time of 3:46, however the music stops before it ever reaches that point?

The track shows a run time of 3:46 and runs the length, but, the actual song has a length of 5:54 or longer.  A person familiar with the song will tell you that the song got cut off.  Pink Floyd songs sometimes do cutoff quick as that's how it's played so I'm not surprised if this one got missed.

@Septe Thanks for clarifying that with me.

I have passed this information along to the team who helps take care of our collection for further review. I have seen other complaints of this, however they have been very light on details, so I will log my own complaint. Several songs have been been cut off or shortened. Specific instances that I have noticed are:

I first noticed this issue a little more than a year ago, and it has persisted since then. My device is a iPhone 7 running IOS 14.2 and the app is up to date. I am part of a Pandora premium family plan. I have not tested whether this issue persists on other apps, I will update this when I do with the results. Please look into this issue.

@Darth_Skaro I moved your post over to this existing thread: Songs cut off before they are finished

To clarify, are the runtime of these tracks shorter that what you expect to see?

Yes, the run time is shorter than expected. On most it’s only about 30 seconds, maybe one minute at most, but on one song I’m particular The Prince of Peace from the album Christmas Eve and other stories a good portion of the song is cut out.

@Darth_Skaro Would it be possible to send me a screenshot of what you are seeing?

Also to clarify, does the song show it will play for "X" amount of time, however it gets cut off after only playing for 30 seconds?

Here are the song lyrics: 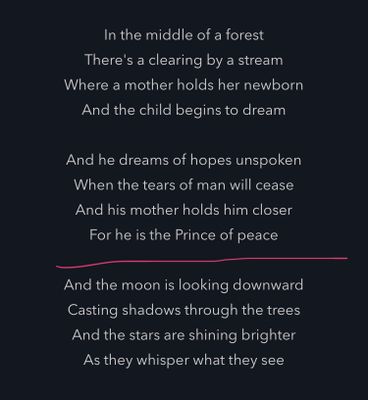 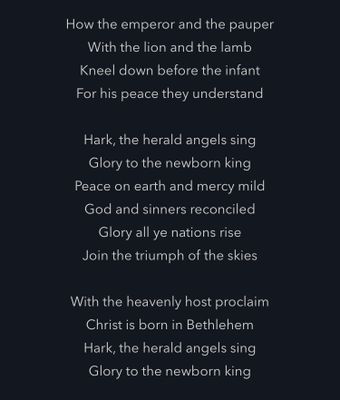 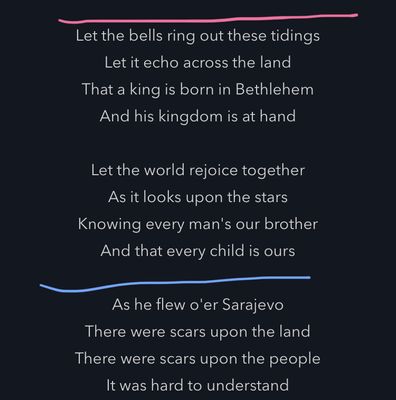 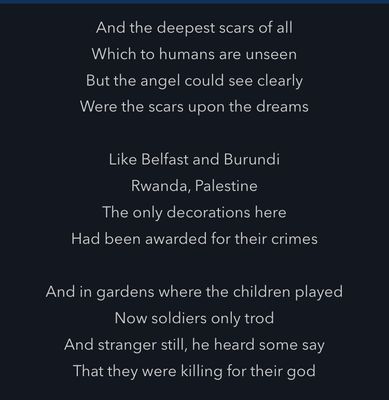 The song runs until the first pink line, at which point it jumps down too the second pink line, and runs until the blue line, at which point the lyrics are completely different. It is important to note that the entire time the playtime stays the same and acts normally, with the little track slider running from one end to another without jumping around or jumping forward. This leads me to my conclusion that Pandora is is playing different recordings of songs, which can vary slightly, or even majorly. There are other instances of similarly named things being conflated or confused by the app, such as albums by Fred Rogers, the kids television show host, being listed under Fred Rogers, the rapper, though this specific instance has recently been resolved.

@Darth_Skaro Thanks for sending that over.

Yes - it is possible that the version you sent over is just a separate recording than one you are normally used to hearing.

In regards to other tracks being mislabeled or various artists having their music listed under an artist with the same name (but different genre), feel free to report any instances of those on either of these threads:

The same thing is happening to me.  I'm paying for this?

@Rayniest1a Could you tell me a bit more about what is happening?

To clarify, do all songs you hear cut off before they finish, or does it only happen with specific songs when they play?

Also, are you listening to Pandora on a computer or on a device?

I'm running windows 10 from the website, playing the station "70s Rock Radio," and the song "American Pie" fades out during the chorus before the third verse which begins "Helter-skelter-in-a-summer-swelter." Nearly half the song is missing.

I don't like paying for a service where half songs are missing.