Unable to Thumb songs on Alexa

Is there a way to find out additional info on "Listening Room Radio not to be confused with "The Listening Room"?  A description would help since the name provides no description of what to expect when listening, also what genre songs from these artists being played that I really like and never heard of before are in?

I took me a while to find out what station was being played as my Amazon Echo Show 5 only displays the name of the song, artist, Album Cover Artwork (which I like seeing), and that it is on Pandora.  Why is not the station listed from Pandora?  Can you all work on this, it would be really helpful because when I use Alexa what music is currently playing, only song and artist is announced, unlike when I listen to Amazon Music, the playlist/radio/station name is also mentioned, which should also be included with Pandora which so far I really like listening too on all my devices in my home.  I have my Echo show's audio output plugged into my home stereo and the quality of the music sounds great.  The Echo Show is part of the Alexa group "Everywhere" in my home that includes all my Echo Dots and FireTV's and really like what I am hearing out of Pandora, especially when there are not that many commercials compared to Amazon.

Another Question, using Amazon Alexa voice commands, is there a way to give particular songs a thumbs up?   I know how to do this using your website off my computer or your app on my phone or tablet.  I already tried "Alexa give this song a thumbs up" on one artists song, but when a different song from a different artist was playing, I got a response of "Similar feedback already given for this" which just is incorrect.  I know when I use the website, phone or tablet by pressing thumbs up, in my profile I can see what I gave a thumbs up too, which for this station could be almost every song.

Earlier today I used Amazon Alexa to play The Listening Room on Today's Country hosted by Thomas Rhett to the group everywhere, which I enjoyed for a while then stopped.  Later in the day I resumed playing Pandora by using Amazon Alexa to play pandora the listening room to the group everywhere, thinking there was only one Listening room and that I did not have to say all I did before.

Instead of Country Music playing by artist I knew when asking Alexa to play Listening Room on Pandora which started without knowing till music started playing was The Listening Room Station.  Every song playing now which has been over two hours are from Artists I never heard of before, many of which I have been writing down their names and can't figure out what Genre they are from.  I enjoy music from most genres and this one has me stumped as to what they would be grouped into for this station.  Many of the songs I would categorize as Alternative/Indie, but there are others that can be Pop. Whomever picked out the music to be played by these artists in Listening Room Radio did a really good job or maybe it was a computer program that did it - either way I really like this music that I found in error using Amazon Alexa and don't think I would have found it any other way.

Question:  Is there a way to see the song history of what I have enjoyed listening too from this station that I started via Amazon Alexa?  I have my Alexa app linked to Pandora but when I login to the website, only the station shows up with not history.

As huge as my music experience is, I can't believe I have never heard any of these artists before and yes I have listened to a lot of Alternative and Indie music - thank you PANDORA!

@Paddler4x While I'm happy to help answer your questions, I am going to move this thread to the Other Devices space since the bulk of your questions are related to your Amazon device.

It looks like this station is based off of the track Listening Room, by Daisy O'Connor. While I am not too familiar with this artist myself, if you click on that link, you can find a list of all "similar songs" to get an idea of the type of music that will play on that station: 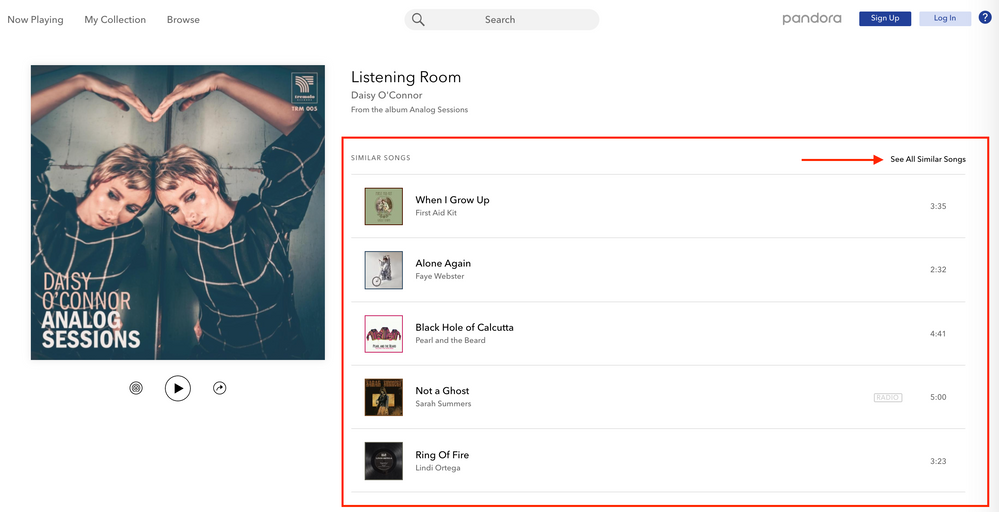 After doing a quick Google search, I was also able to locate this artists website here if you'd like more information on them.

Thumbs up not saving with Alexa voice commands:

I have enabled a trace on your account to get a better idea of what is going on when streaming Pandora on your Echo device.

Can you please try reproducing this issue where when you attempt to provide a thumbs up/down on a track, Alexa will respond back with"Similar feedback already given for this"?

Different station playing when requesting The Listening Room on Alexa:

This sounds similar to what others have reported on this thread: Alexa Voice Command Issues

We're aware of an issue when requesting a station with Alexa the requested station does not play.

We're working with Amazon on investigating this issue.

Please let me know the name of one of the auto-generated playlists that play when streaming Pandora on your Alexa device.

Additionally, can you tell me the model of your Alexa device and the generation?

Additionally, can you please report this issue with Alexa directly. You can do this by sending Alexa an "Utterance History report."

To view your utterance history report, click this link from a computer and log into your Alexa account. Or from a mobile device launch the Alexa app, tap the Menu icon, select Activity and then More under Pandora activity.

From here you'll be able to view what Alexa thought she heard, as well as listen to a recording of what you said. Be sure to let Amazon know by selecting No.

History of songs when listening on Alexa:

While this is not currently a feature, I recommend upvoting this existing feature request with a ❤️to express your interest in seeing it added to our service: Make Listening History Available

Thanks for the additional info on Listening room radio that I got accidently as already described and mentioned I really like these artists that I never heard of before, thanks Pandora.  I see this station now is in My Collection when I logged into via pandora.com, so in the future, can access it easier.

Thumbs up issue:  I just started streaming via Amazon Alexa, Alexa on Pandora play Bad Company Radio to the group Everywhere, Alexa actually responded correctly by playing this requested station correctly, however I expected the first song or the few actually from Bad Company.  The first song was from Bob Seger and did what you instructed by saying exactly,  "Alexa, Thumb up this song,", and don't recall exactly what the reply was but was along the lines of thank you for the feedback.  The next song was Rocket Man from Elton John, however when I repeated the phrase "Alexa, Thumb up this song,"  Alexa responded back with "Similar feedback already saved for this", instead of along the lines of thumb up noted.  Next song, Phil Collins "In the Air Tonight (2015 Remaster), again I said, "Alexa, Thumb up this song, again Alexa responded with "Similar feedback already saved for this".  To me Amazon Alexa is responding not to individual song thumb up or down but incorrectly to the station.   Different test, I have an Echo Show 5 that is part of my Everywhere group and the device I started Pandora several moments ago in playing Bad Company Radio.  After only 3 songs, I'm being presented an ad, really?  So soon?  Next song, "Any Way You Want It (Live at Cobo Hall in Detroit)" by Journey.  Instead of initiating Alexa, I touched the screen of the Echo Show, and pressed the thumb up, which responded with light background circle around the thumb for a moment and went back to displaying album cover artwork, song titled, musical group, and Pandora under group name and also in upper top right.  Next song is from Heart, "Alone" Alexa's incorrect reply as previously given, "Similar feedback already saved for this".

I then changed what was playing on Pandora and started play by saying "Alexa play Pandora Luke Combs Radio Station to the group Everywhere.  First song was from Luke Combs which is what I expected, "Moon Over Mexico", again I repeated "Alexa, Thumb up this song,"  Alexa's response, unexpectedly with a change in radio stations was incorrect, "Similar feedback already saved for this", I expected to hear Thumb up recorded or whatever the acknowledgment is.

Using the touch screen again on the Echo Show, while Toby Keith's Beer for my Horses Feat. Willie Nelson was playing, I pressed Thumb up that again and a circle around it appeared for a moment.

Not sure how you want me to create the name of one of the auto-generated playlists, please provide directions.

I attempted 3 times to provide Feedback to Amazon under Music and Books, but each time after several words were entered on screen, I got kicked out, each time having to start all over, seems Amazon does not want to play well when it comes to Pandora.

Again tell me how to initiate the name of one of the auto-generated playlists that play when streaming Pandora on your Alexa device, and I'll do it.

How to I send an Utterance History report?  When I asked Alexa, she responded with that is showing in the Alexa app under menu, activity, "Sorry, I couldn't find the answer to your question.".  I checked the settings menu on my show, and did not find it there nor on the Alexa app on my Samsung S9+, tell me how and I'll do it.   Wait, I see you started to tell me how from my desktop computer, but did not provide the link to click on Adam...  There are other entries for Pandora Station, playing specific radio stations were all correct.   Did not see any entries for thumb up.  Now looking further on Alexa App on Samsung phone, under Voice History for Today, I am browsing it now... all seems to be in order, I only see transcripts of what I asked and what Alexa responded with.

Need to go work, I'll check my email later for your or another moderators reply.