Songs on customized playlist are replaced with live versions

A new trick from Pandora: now they're editing my playlists for me. This is how: they're deleting studio versions of songs I've added and are replacing them with cheaper (and much worse) live and out-take versions.  Making my playlists--which I've spent tons of time editing--increasingly useless.  Yet another way Pandora have found to express their contempt for their subscribers.

To keep the community space organized, I moved your post over to this existing thread as what you're expressing is extremely similar regarding alternate versions of a track: Thumbs apply to alternate (unthumbed) versions

I would recommend checking out @AdamPandora's post about interactive rights here.

In the meantime, your feedback has been noted. We will share this with the appropriate party on your behalf.

If Pandora is going to re-edit our playlists for us, that makes them useless.  Right now about 40% of the songs in my rock music playlist have been replaced with really horrible live versions. They are unlistenable.  So what's the point of a playlist?  Pandora 1) makes them hard to edit yourself and then 2) edits them whether you want them to or not.  I despise live versions, and now my playlists are useless.

If word gets out that Pandora is doing this, it'll be even harder to attract/retain subscribers.  To say that I'm dismayed is an understatement.  Just as with removing the "I'm tired of this track" functionality for Premium subscribers, Pandora keeps de-contenting the service  for its best customers.  That's a strange business model to say the least.

@Richmond99 This thread is specific to regular stations, however it sounds like you are referring to your customized playlists.

Music in your customized playlists should not be swapped out with different tracks.

Can you please give me the name of one of your playlists where songs are getting replaced with live versions?

Can you also send me a screenshot of an example of a track that was replaced with a live version?

Thanks for your prompt response. Have sent you a DM w/screenshot.

I would very much like to retain control over my Premium playlists.

@Richmond99 Unfortunately, we do not provide support over PM.

Would it be possible to add those screenshots and your message in a direct reply to this post?

I'll be happy to look into this further from there.

Hi again--there's too much personal information in the message and the screenshot for me to post them publicly.  Can you recommend a workaround?

@Richmond99 I ended up separating your posts into its own thread since what you are experiencing is different than the original thread this was posted on.

I have escalated your feedback over to our engineers so that they can take a closer look.

Keep an eye on this thread as I will provide you with an update when I receive more information.

Any update?  It's been ten days now.  Thanks

Actually it's been nearly a month since the original complaint.  Now songs in all of my playlists are being removed and replaced--not just with inferior versions but with entirely different songs.

@Richmond99 I checked in with our engineers again and they are unfortunately at a loss with this one.

They have enabled a trace on your account to help us better understand what's happening.

For this trace to be useful, they have requested that you remove any live/remixed versions of tracks that were inserted into your playlist, and re-add the regular studio versions.

If they are replaced with live versions again after going through this process, please make sure to reach back out and let me know by replying directly to this thread.

I can then follow back up with our engineers so they can further investigate.

Thanks for continuing to work with us on this.

Okay thanks. Attached is a SS of the 'before' screen for a playlist segment.  Each of the 'live' tracks was previously a 'studio' version. I'll now replace these and see what happens over the next few days.  Then I'll try it with a jazz playlist which is frankly more important to me.  Thanks again for your help--I'd really like to get this issue resolved. 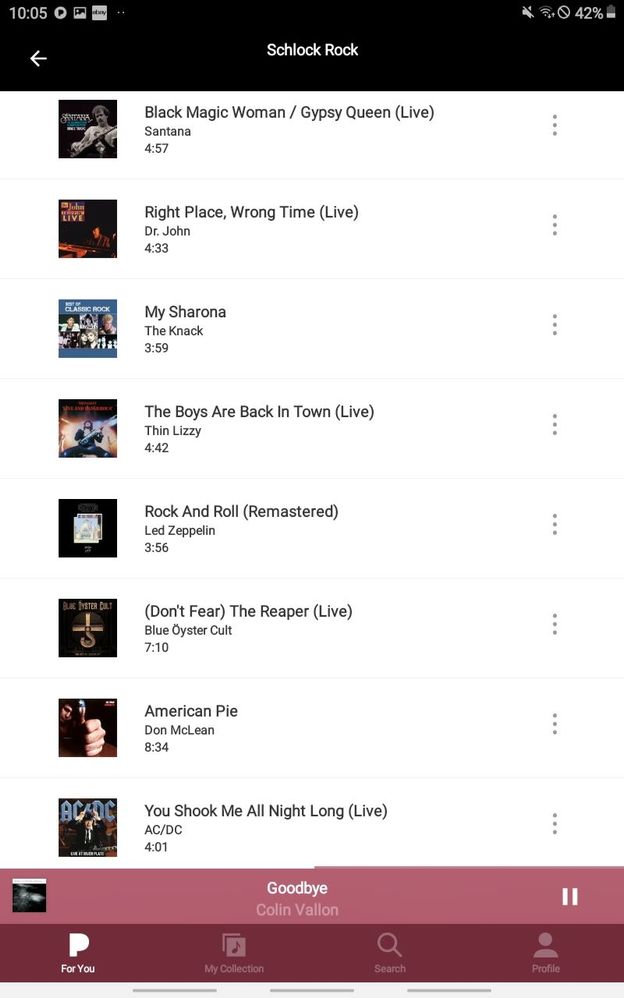 @Richmond99 Thanks for sending this over.

I'll keep an eye out for your next message if it continues to be an issue for you down the line.

Still there?  I've returned to this issue today.  It's become more complicated.  Now live versions are replacing my selected studio versions without being indicated as such.   If you can see my 'Shlock Rock" playlist the Allman Brothers' "Ramblin' Man" is such an example.  It's displayed as a studio cut but it's actually an extended live version if you listen to it.  Can you provide any insight into this new angle?  Thanks

PS: In relation to the original issue, I've noticed that songs generally aren't replaced with live versions until I've situated them within the playlist.  Unfortunately this makes for additional work twice: once to locate and then situate them wherever; then again when they need to be replaced. Advice welcome as always.

To clarify, do you add the studio version of the track to your playlist, and then notice that they are eventually replaced with a live version?

In the example you provided, I see that the track currently added to your Shlock Rock playlist is the live version of Ramblin' Man: 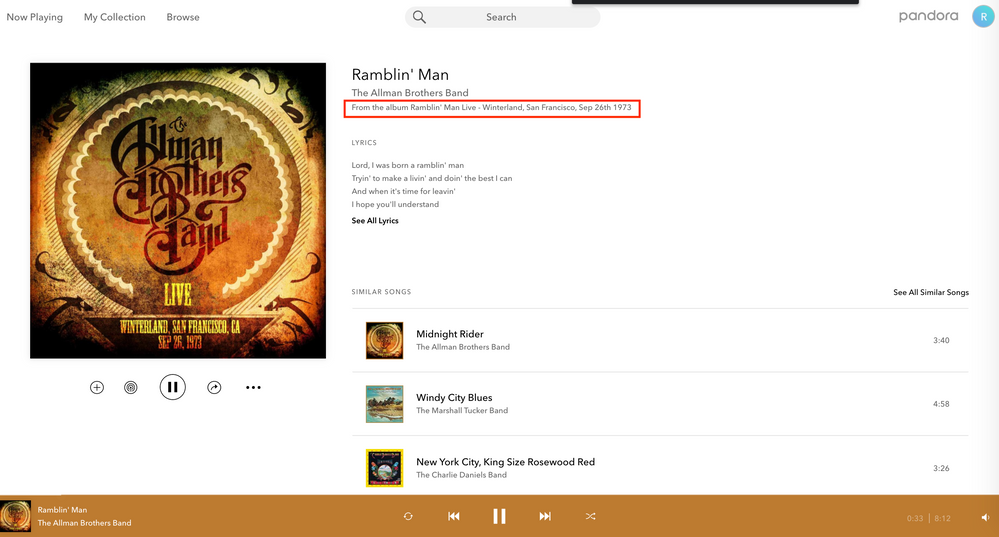 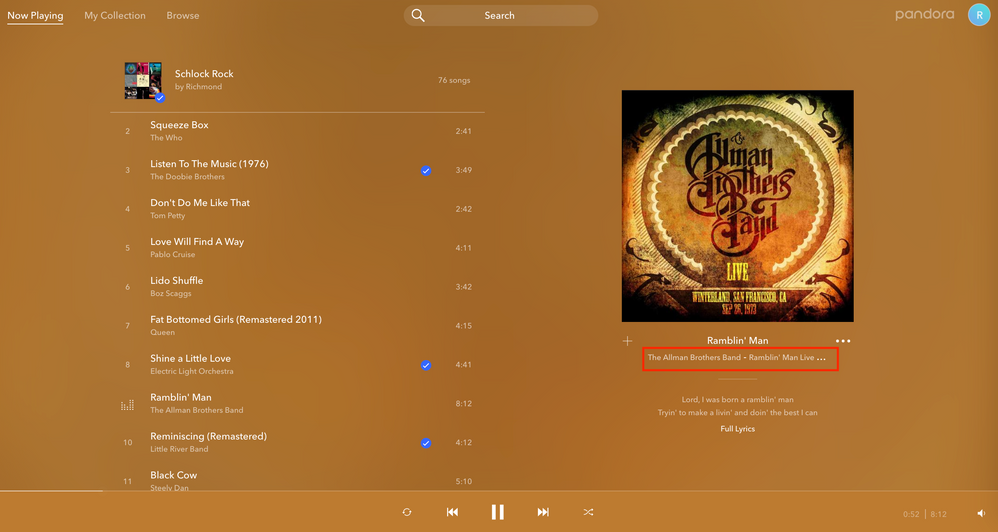 I recommend removing that version of the song from your playlist, and instead adding this version: Ramblin' Man

If this version gets replaced again by that live version, please let me know.

Your graphic shows a live version I've never even seen before!  The latest issue is that live versions are replacing my selected studio versions without being indicated as such.

Anyway, I've already replaced the versions as you instruct, and a day later it's still sticking.  So I'm moving on to the next example: Santana's "Black Magic Woman" -- same deal here except that in this case the live version which Pandora chose to replace the studio version on my playlist was in fact marked as such.  That does help to identify what's going on, if not why.

Part of the problem is that I'm able to add tracks which seem to be properly included in my playlist, but if I come back days or weeks later I find that dozens of tracks have been replaced.  Not only is it a laborious task to search and replace the tracks one-by-one, but the new additions end up situated at the end of the playlist rather than in their original sequence.  This amplifies the labor factor considerably, and it's why I just quit listening to that playlist entirely.  I'm sort of afraid to look at others--there's only so much time in a day.  Thanks for your assistance.

@Richmond99 I've created a ticket with our engineers to see if they can dig into this deeper.

I also removed the live version of Black Magic Woman from your playlist as I do see you were able to add the studio version back: 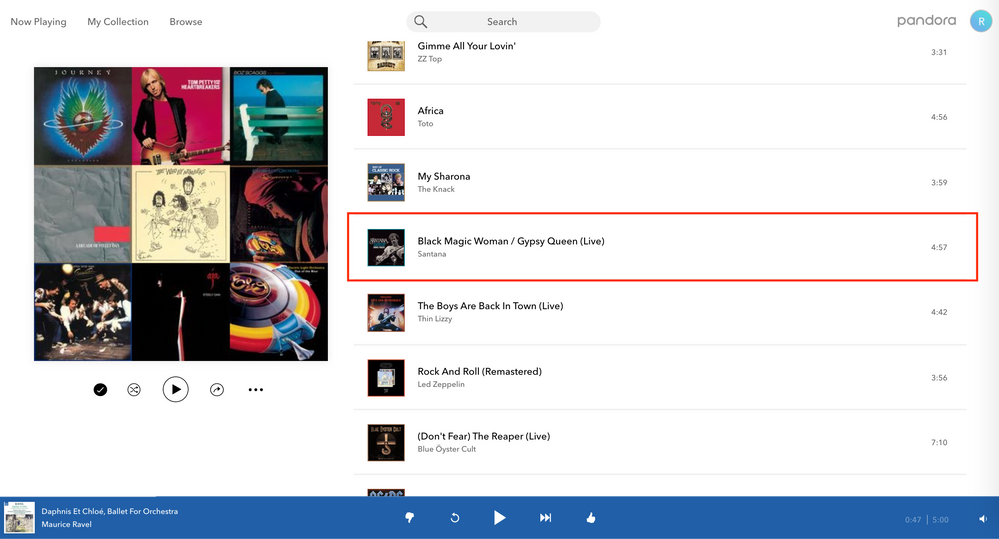 In the meantime, if you notice any other tracks on this playlist getting replaced with live versions, please make sure to reach back out and let me know.

It's a shame because (as usual) I spent a lot of time creating and 'curating' the list.  Not only are there substandard/re-recorded/demo/live versions substituted, but even the ones whose names haven't changed have also been replaced.  The upshot: yet another playlist has been rendered completely useless.

As I've said before, it's mystifying why Pandora goes so far out of its way to alienate its paying customers, especially in instances like these where the music is fairly unpopular and hence should not be costly for Pandora to stream in the first place.  Any thoughts? 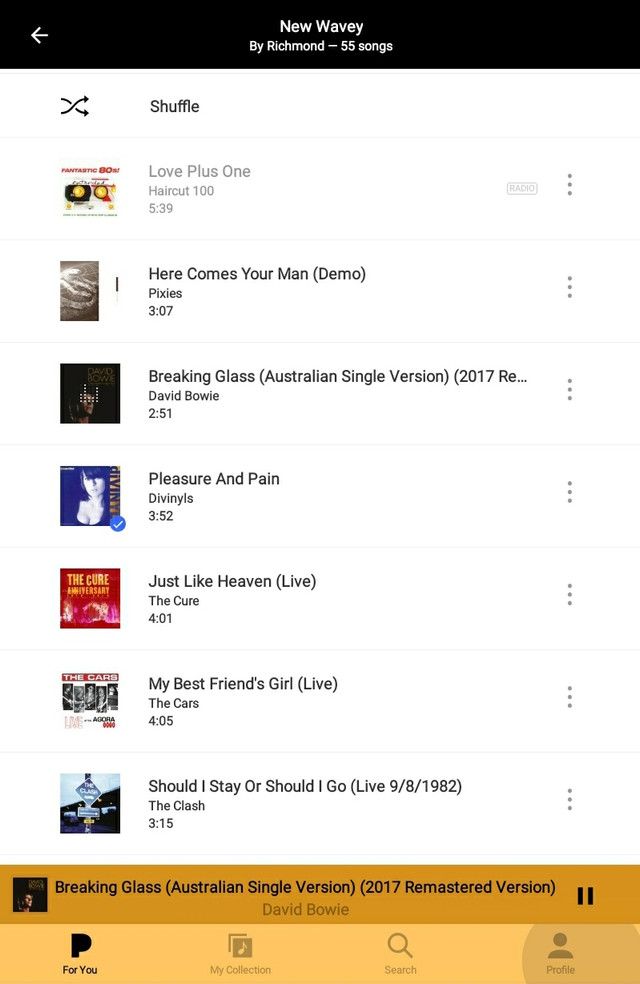 @Richmond99 I definitely understand your frustration.

I have passed your additional feedback along to the engineers who were looking into this.

Thanks again for all your patience as they work to find a fix. 🛠