I got the Update pop-up just now, and tapping the Update button just re-opens the app, it doesn't go the Play app store or anything like that... so I'm not sure why it's popping up or what the button is supposed to do. This adds pointlessness on top of an excessively large and obtrusive notification.

@padaco Would it be possible to send me a screenshot of that particular pop up prompting you to update the app?

Thanks for the help with this. 🤝 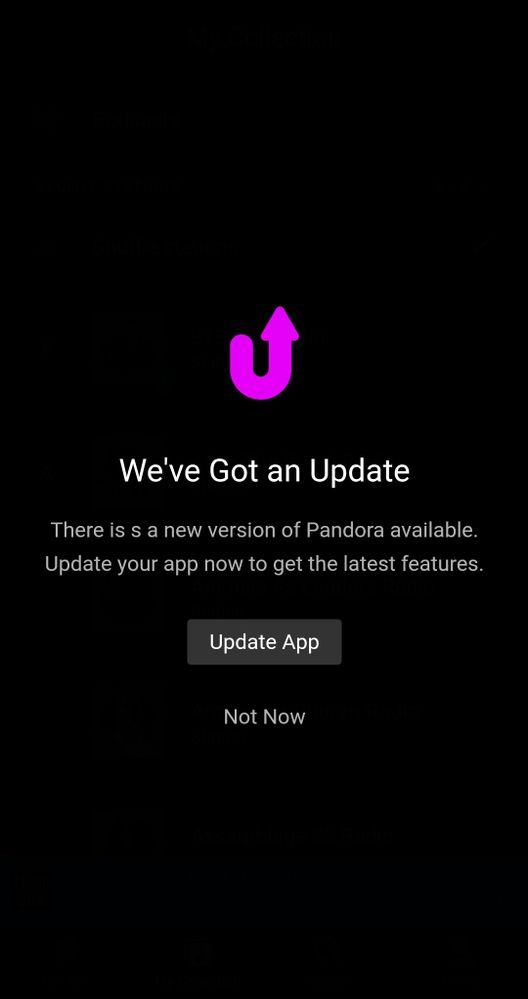 I created a separate thread for this issue, @padaco.

Thank you for reporting this - I have escalated your feedback to our engineering team so they can further investigate.

Sorry if I don't remember how all of the various threads from people on the pop-ups have been structured, but this is part of the bigger issue of obtrusive pop-ups getting in the way of usage when going to the app or going to change a station or going to do anything else really when the app hasn't been in main view for a while.

If Pandora would stop popping up these full-screen pop-ups, and just make them a bar at the top or bottom (like where an ad would be?), or a button in a corner somewhere... then I wouldn't get stuck like when a button in the pop-up doesn't work, or have to add extra steps to me just doing basic stuff regularly, which Spotify and Apple Music and Amazon Music don't do. Maybe Pandora management doesn't care and thinks they make more money by annoying users this way, but it's really causing me to use other apps more often, and eventually I'm not gonna pay to be harassed.

Thanks for your feedback about this. I completely understand your frustration.

A separate thread / post was created for this as it's a separate issue, and so that other listeners can find it easily if they experience something similar. We've shared your feedback with our engineering team so that they can investigate what's happening. If you notice anything else, please don't hesitate to let us know. The community moderators create internal tickets and report issues / listener feedback to our engineering team. We appreciate you taking the time to report this. 🎧