My wife and I have different accounts.  We both have "Disney (Children's) Radio".   After awhile no English versions of songs play, they go to all foreign languages including German, Japanese and Spanish.   It happens on our Roku, Facebook Portal, Android phone, iPhone XS and web browsers.

We even reset the station so nothing was liked, it still does it eventually.  What is going on?  How do we get it to stop?

@davidhietpas Nice to see you around the community. 👋🏽

The next time this happens, can you please make note and write me back with the following? I have the same problem, only with Disney songs and now it’s moved to my Thumbprint station. I don’t want to thumbs down the song, it shows I gave it a thumbs up (Which I didn’t), but I did when it played in English, so if I give it a thumbs down it won’t play the English version.

@SuperGirl83 Thank you for reporting this.

I am going to pass your feedback over to our engineers so they can take a closer look.

I will reach back out to you on this thread when I receive more information.

Do we have any more information on this thread? I'm also getting songs that were 'thumbed up' in the English language playing in Spanish (with a thumbs-up). Don't want to 'thumbs-down' the songs if it will effect the English language version. This appears to happen every few weeks.

For me, this is not happening on a canned station like Disney radio, but on a station that I created and have curated over many years. 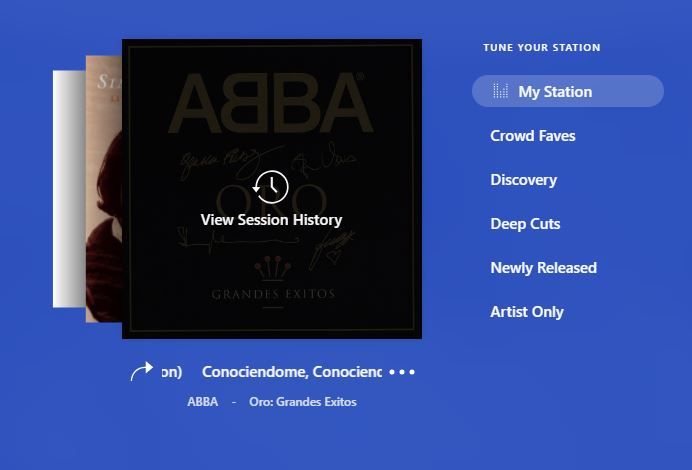 Thanks for reporting your experience, and for that helpful screenshot.

Be happy to share. The exact name of the station this seems to occur on is 'Ron's Music'. Again, this is not a canned station but one I created and have been managing for so long (more than a decade) that almost every song it plays has a 'thumbs-up'.

I have not noticed this on my other stations, but I do not listen to them nearly as often as I do this one. To be fair, I listen quite often and when this happens it's less of an inconvenience and more of a curiosity as to how the algorithm chose to deliver a foreign language selection.

@redwards Thanks for following up.

I believe this may have to do with those specific tracks that are playing, rather than the station itself.

I have passed your feedback along to our engineering team so they can take a closer look at that specific track by ABBA that you sent over.

If any other tracks that play in a different language (with the Thumbs Up icon already highlighted), please grab a screenshot and send those to me in a reply to this thread. Make sure your screenshots include the full view where the highlighted Thumbs Up icon is visible. I have also been having this issue, as with SuperGirl83, with my Disney station. The specific songs that have been doing this include "Touch The Sky" from Brave (plays in Italian), "Make A Man Out Of You" from Mulan (In Japanese). Many others songs still play in English but with the other language cover art, Brave has the Italian cover, Mulan has the Japanese cover, Tangled has the Spanish/Portuguese cover, etc. Some of these affected soundtracks still have specific songs with the English cover, such as "Reflection" from Mulan.

Also somewhat related to this, my thumbs up tracks of the Broadway Lion King soundtrack will randomly swap between the original and new cast versions, and I know I didn't intentionally like both versions.

Thanks so much for reporting this!

I've shared this feedback with our engineering team so that they can investigate. If you notice any other songs that are Thumbed Up playing in the way you described, please send over a screenshot if possible.

We appreciate your patience while they look into this. 🎧

@Missojai Our curation team was able to resolve the issue with the specific tracks you reported.

Thanks again for reporting this. 🤝 This happens with a new station I just created with Encanto songs. I chose each song in English, yet many other language versions of these songs get played.

@seh0041 Unfortunately, there isn't a way to filter out other versions of songs that get played on that station.

However, if you continue to Thumb Down those versions, you will not hear that version again on the station you're listening to.

This will not keep the studio version of that track from playing and doesn't necessarily mean that you will no longer hear other songs by that artist.

As always, you should use your Thumb ratings freely to tell Pandora what you want and don't want to hear.

In the meantime, make sure to give this existing feature request a ❤️ to express your interest in getting it added to the service as well: Exclude Live Performance/Remixed Versions of Songs

I've had a number of songs that do this as I listen to a lot of K-pop. Here's one. I initially gave it a thumbs-up quite a while ago and, at some point, it just switched over to the English version. I thought it was just that it was also giving me that as an option which was fine, but I haven't heard the Korean version since that point which **ahem** since I like the song. I can find the album (and therefore the title track on it) on Pandora, but it won't let me add it specifically as additional variety as it doesn't seem to recognize that it's different at all. I've also had this issue with ITZY's "Not Shy" and a few others that I don't remember at the moment. From the other threads about it, it's a somewhat widespread issue with regards to world music. I don't know if there's an issue with how the information is being entered into your system as I believe all of the alternate-language versions were released later than the originals, but it might be something to look into? I don't know. I just love this song and miss hearing it when I jam to my Pandora station because it was my intro to Kpop back when it came out.

@mmmdraco I created a ticket with our engineering team so they can help look into this further.